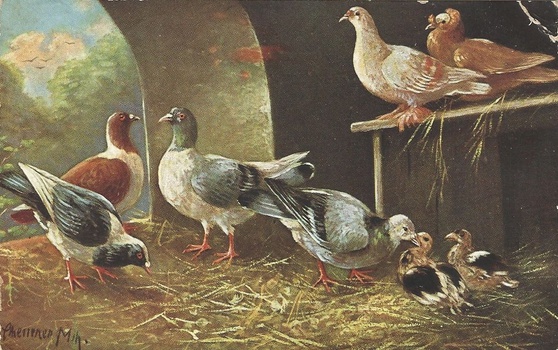 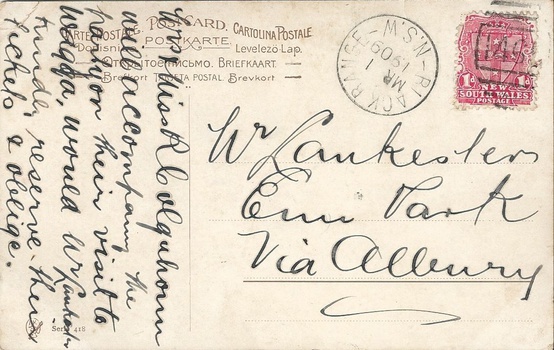 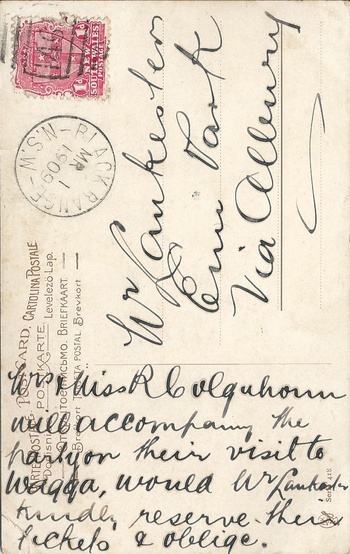 This card of Maude Lankester remains a bit of a mystery to me. I cannot identify the maker. The message from Ms Colquhoun has partially obliterated the mark at bottom left. I can see an artist's palette, PK(?) and letters below. Any help with it would be appreciated.

The card itself is also a mystery. I cannot read the signature of the artist responsible for the scene inside the dovecote. I get the idea of the 'pigeon post' and post card. The family of posties! The younger generation of postal workers! The retired posties too, I suppose, at top right. Great fun.

On the reverse is a clue about the origin of the card. The languages represented include most of the European majors and minors:
Carte Postale Post Card Cartolina Postale
Dopisnice Postkarte Levelezö-Lap
Postcard (in Russian) Briefkaart
Brefkort Tarjeta Postal Brevkort

Does CW do Cyrillic yet? No!

But it's the message that really has amused me!
Did people really talk like this?

Mrs & Miss R Colquhoun will accompany the party on their visit to Wagga, would Mr Lankester kindly reserve their tickets and oblige."

What does this mean?
I am not certain whether the author is Ms Colquhoun or another person. The use of "oblige" had me perplexed for a while. The best I've come up with is that it is a short form of "pay for the tickets and pick them up".

It is dated by the post mark March 1 1909, franked at Black Range N.S.W.
The card also has a one penny red New South Wales stamp.

Originally I thought this card was sent from Black Range a town near Bega on the coast of N.S.W. 500 km (310 miles) east of Albury.

However I have now found out that it actually refers to another Black Range .... just a kilometre or so away from the Lankester home in Ettamogah. In June 1909 the name changed from Black Range to its name today "Lavington"!

"Following various representations by the Progress Association, the Postmaster-General approved the name Lavington as a substitute for the name Black Range in May 1909. On the 14 June 1909, Black Range as the name for a village north of Albury was, according to a local newspaper, “officially at any rate, a matter of history”."

This was just a few months after this card was sent. The area had been an early contestant for the possible site for the Australian National Capital.

"A map in the Albury Border Post of 31 August 1900 shows Black Range, south of Kaitlers Road being part of Albury’s “bid to host the Federal Capital site.” This site was not to make the final list of sites for consideration which saw in late 1908, Canberra selected as the Federal Capital."

I now am a bit closer to knowing the identity of the Colquhouns! L. (J.) Colquhoun played cricket for the Black Range cricket club in 1904. He went on to become a very wealthy real estate agent in the Albury area. I'm sure Maude Lankester knew him as a young man.