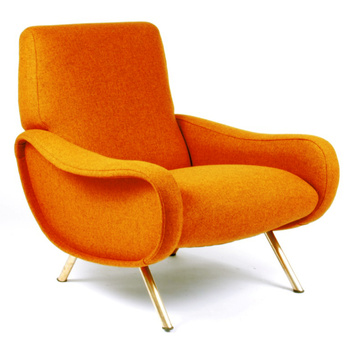 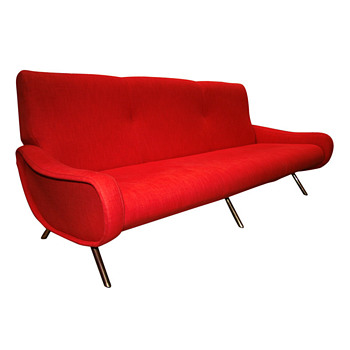 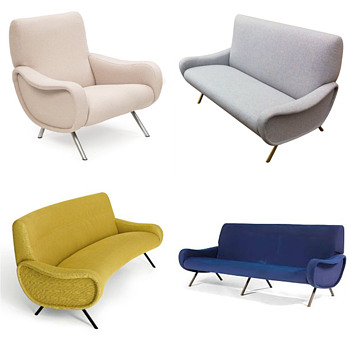 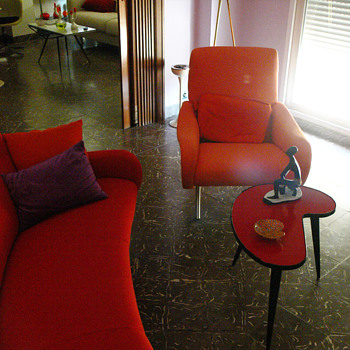 These are some of the latest seatings arriving at “our” collection. They are the LADY easy chair and sofa, designed by Marco Zanusso in 1951.

They were purchased showing a most awful upholstery, and we decided to get them re-upholstered in red and orange. During the process we got news from the upholsterer telling us he had found as much as four different layers of fabrics on them!!! I can't believe they had kept the previous fabrcis every time they wanted to change them.

Even if some LADY chairs were made in Spain under Arflex licence (“Between 1955 and 1960 Arflex began its diffusion on international markets with creation of consociated societies for manufacturing and sales in Benelux, France, Switzerland and Spain”, as i can read at Arflex's website), these have got the original Italian stamps on their “wooden skeleton”, which were found during the re-upholstering process).

I've found on the internet that there were at least four models designed for the Lady range: the easy chair, a love seat, a three-seaters sofa and a four seaters sofa. The bigger models (fot both and tghree seaters) seem to have been designed in both straight and curved shapes, and they also seem to have four or six legs (our's is a curved three/four.seaters one with six legs). I have also found images of sofas with no arms... they're a bit weird but they look like “real ladies” :) In any case, you can see a few LADY models on pic. 3.

On pic 4 you can see them at "the other house"'s living room. You can also see other vintage stuff, such as the kidney shaped table, the white table at the back, a footed ashtray or the Anzengruber African woman figurine... and the original 1950s ceramic tiling of the house.