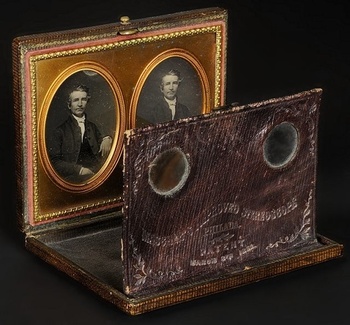 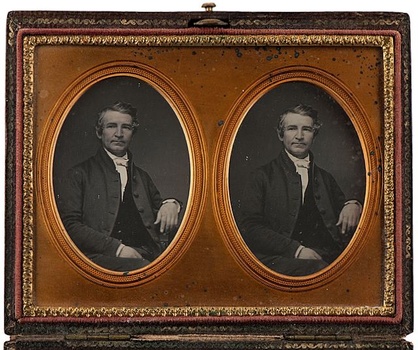 Long before radio, television and social media (etc.), photography was an early form of entertainment. Stereo photography, in particular, was very exciting. Stereo daguerreotypes and a way to view them started appearing in 1841; however, the first truly portable viewers became available in 1853.

John Mascher, a Philadelphia inventor, patented a novel approach by adding a hinged viewing flap with a pair of magnifying lenses to an ordinary daguerreotype case. These early “Mascher” style viewing cases became quite popular for a brief period from 1853 to 1856.

Shown here is a very nice example of an early Mascher viewing case with its original pair of ninth plate stereo daguerreotypes of a gentleman. When closed, the viewer looks like any typical leather covered, quarter plate, push-button image case. Opening the case reveals the patented leather viewing flap imprinted with “Mascher’s Improved Stereoscope” and its patent information of March 8th, 1852 ... the first American patent for a stereoscopic viewing device (#9611). Oddly, the viewer’s imprint is the year 1852 but the actual patent is dated as 1853.

Viewing the image is somewhat cumbersome. You have to somehow grasp the case while at the same time hold upright the viewing flap and image. Although clumsy, the stereo 3D effect for this particular image is quite good.