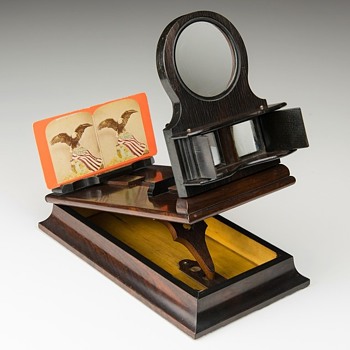 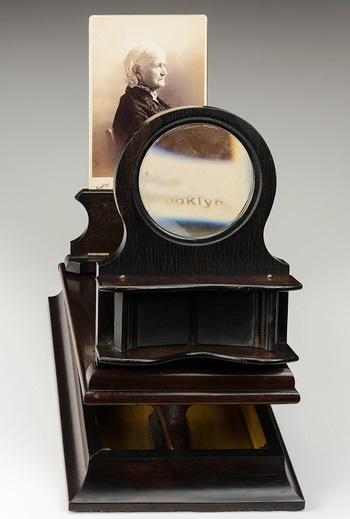 Long before radio, television and social media (etc.), an early form of entertainment was looking at photographic images in cases or viewing in devices such as stereoscopes. The original stereoscopic viewers (1840s to early 1850s) were made for daguerreotypes; sensitized silver coated, polished copper plates that produced images on a mirror-like surface. Daguerreotypes slowly gave away to glass plate ambrotypes and by the 1870s, card mounted paper images, including stereoviews, had just about completely overtaken the market. And why not: They were much more durable than daguerreotypes, less expensive, easier to produce, and reproducible.

In particular, stereoscopic viewing devices underwent major changes and a staggering variety of handheld, desktop stand, and floor versions appeared from the mid-1850s onward. One of the more curious yet popular designs is known as the stereographoscope; an odd type of viewer for both stereoviews and single images.

The first stereographoscope was described in an 1864 Great Britain patent by Charles Rowsell. The term ‘graphoscope’ was not used at the time but came to refer to viewers with a large magnifying lens to more clearly see pictures and other objects. Stereographoscopes have a large magnifier that is typically above a pair of lenses for stereoviews. England, Europe and the United States were the main producers and, for 30 to 40 years, incredible numbers of viewers were made and sold.

Given their popularity in parlors, many designs were unbelievably elaborate and constructed with the same great care as fine furniture. Rich veneers, exotic materials, ornate inlays, and fancy open wood fretwork (et al) were not uncommon.

The mid-1870s American stereographoscope shown here is attributed to James Lee. I like this particular viewer because it is simple and straightforward in design with some sculptural qualities. Different types of wood were used and the majority of the body is made of nicely figured rosewood.

Cardboard mounted images are held in a sliding carrier for focusing. Stereoviews are placed in a slot at the bottom of the carrier with a small brass marker as a reference point to center the image. Retractable eye shades make viewing better by blocking stray light when looking through the square cut lenses. Single images are set into a slot at the top of the carrier. The overall viewing angle can also be set to three different positions.

The 1870s stereoview of an eagle and American flag is posted here separately on Show & Tell. The cabinet card is an excellent portrait of Eunice White Beecher, wife of minister and abolitionist Henry Ward Beecher, made by the renowned Brooklyn photographer Frank Pearsall.