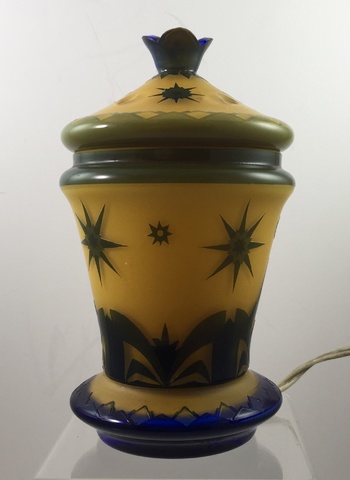 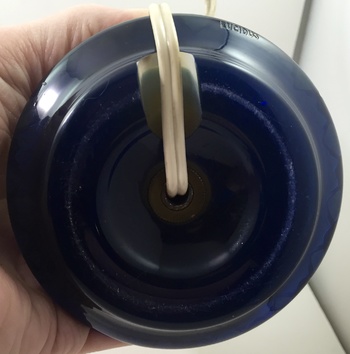 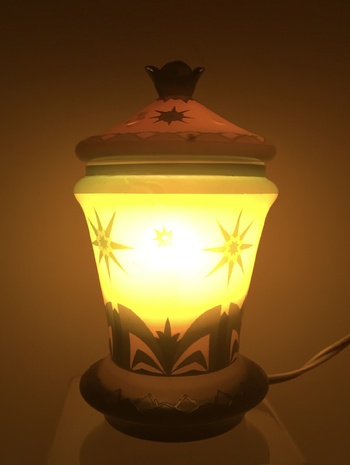 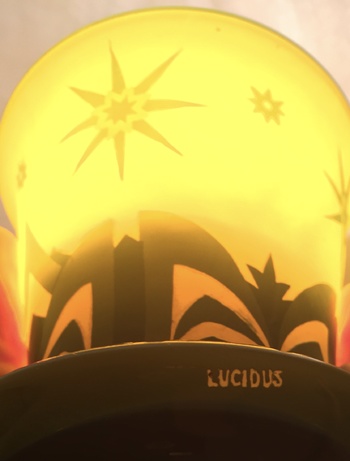 One of the coolest things for a collector doing research has to be when discovery coincides with availability. This happened while I was doing research for an article on Loetz cameo glass (link below) for Loetz.com. I had previously done a piece on Loetz marks after 1920, so it was fresh on my mind that there existed a mark used by the Loetz factory that had only been referred to in written sources. The LUCIDUS mark is referred to in the back of Loetz Bohemian Glass 1880-1940 (Hatje Cantz, publishers, 2003) as follows:

LUCIDUS - A mark by a commissioner for glassware of the 1920s so far only documented in written sources.

It does not say what type of glass, what the pieces look like, or give a specific date. However, in the section of the book titled "A Return to Old Techniques (1918-1940)", it is stated that the LUCIDUS mark was used on commissioned glassware in etched decoration. There is also a footnote:

1. Letter from W. Minde to Loetz on April 24, 1928: "The client's trademark is LUCIDUS and he would like this word on the articles. Of course this should not be conspicuous and you possibly would have to put it just above the foot. The word should not be longer than 10-12mm."

According to the "Index of Customers..." in the back of Loetz Series II Paper Patterns for Glass from 1900 to 1914, by Jitka Lnenickova, the firm "Walter Minde, Kristall und Glaswaren, Porzellan und Keramik" was located in Liberec, Bohemia. Minde began working with the Loetz glassworks in 1914, and he soon became one of the firm's most significant agents. Their relationship continued until at least the early 1930s.

So much for discovery; now for availability. As luck would have it, a seller on eBay listed a perfume lamp in etched decoration with the LUCIDUS signature at the time I was working on all of this, and I quickly struck a deal with the seller to acquire it. In researching the name LUCIDUS it was found that lucidus is a Latin word that translates into English as "lucid, bright, beaming" - so it makes sense that the name would be imprinted on an electric lamp!

There was a firm in Paris in the 1920s called Lucidus, and they produced electric lamps for early automobiles. There was also a company called Jumo that in the 1940s (too late for Loetz) produced a popular line of folding bakelite lamps called "Lucidus block". Whether the Paris firm was the mysterious W. Linde customer referred to in the letter is unknown, but it is a question to which I plan to continue to try and find an answer.

With this exciting find, I went to the Loetz Advisory Group and was delighted when another member of the group, Kai Hasselbach, found an image of a glass lamp in etched (cameo) decoration with the Lucidus mark that was sold at auction in Germany over ten years ago. This example, however, did have a known Loetz production number - III-3906, in sky blue with an outer layer of dark brown. Although the shape was different than my lamp, it was similarly constructed - a covered container with 5mm holes punched in the lid as called for in the production notes for that shape. Furthermore, the PN corresponds to the year 1928, same as the Linde letter.

The paper patterns for the Series III production numbers are only partially preserved, but for the ones that do exist, it appears that PN 3904, 3905, and 3906 were all similar vessels (covered jars with venting holes in the lids). There is a gap in the preserved records, then PN III-3951 is a similar type vessel - slightly different shape than my lamp here, but in the production notes - lists etched decoration, 4 X 5mm punched holes, lidded jar in citrongelb a. dunkelblau (citron yellow with dark blue) - the same colors as my lamp. So while the production number of mine is not known, I feel that it has to fall somewhere in between III-3906 (earlier pieces are not lamps) and III-3951, or thereabouts. There is also another vessel in the Passau Glasmuseum in the same shape as my lamp, except that it has a different type of finial on top.

As you can see, the piece shown here is in citron yellow and dark blue acid cutback decoration that is very similar to the deco etched decoration executed by Marey Beckert-Schider, wife of former Loetz Artistic Director Adolf Beckert, just a couple of years earlier. I have no reason to think the design is by Beckert-Schider, but I do have ample reason to think that it is, at a minimum, influenced by the Beckerts. It is an electrical lamp with its original wiring. There is a channel cut and polished in the base that allows the cord to come out from underneath so that the lamp may sit flat. And just above the base, carved in acid, the word LUCIDUS, which is 11.5mm wide - exactly as prescribed in the Linde letter of April 1928.

In summary, LUCIDUS has finally been illuminated - in more ways than one!

This and the other example from the German auction are featured in my latest article for Loetz.com - An Exploration of Loetz Cameo and Acid Cutback Decoration - you can check it out by cutting and pasting the link below into your browser: 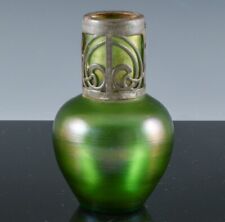