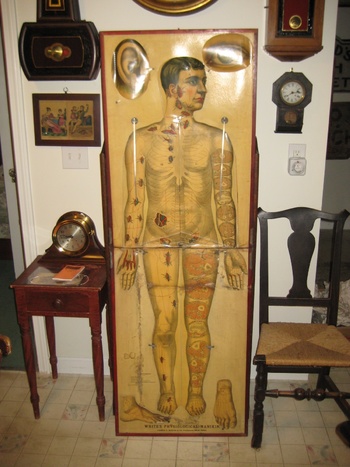 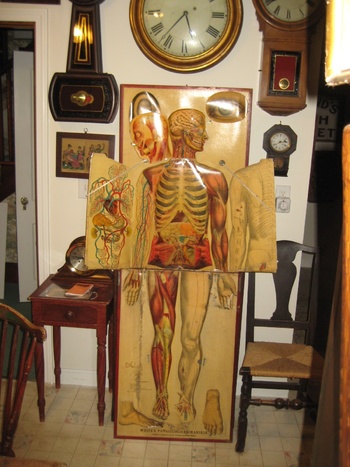 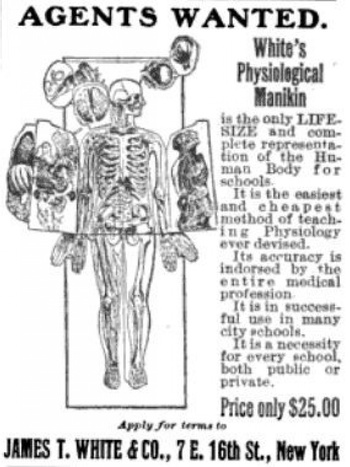 Let me just start by saying when trying to find a category to place this under, I was quite surprised that there is nothing for "scientific" or "medical", but there is for "frisbee". So, since it's printed, I placed it under "prints".

This is a life sized 19th century anatomy teaching tool. It is beautifully chromolithographed on paper applied to cloth. The various sections open up to reveal the layers of human anatomy. Shown are just a couple of the many layers that can be opened. The entire thing is mounted in a mahogany case that folds in 1/2.

Oddly, though clearly male, one of the fold out sections is a uterus and ovaries. Somewhat more bizarrely is that based upon my research, it found that in later versions, they even included a cutaway view of a gravid uterus. A true hermaphrodite?

James White was a publisher, poet, etc. He was considered a bit of a Renaissance man in his day. In 1886, he founded a publishing company in NYC and this was one of his products.

As indicated above, I've learned that it appears that there was more than one version of this. Mine is the earlier one which bears patent dates up to 1886. There are later ones that have patent dates from 1889 and a somewhat different looking guy.

One can find additional info about these by searching on-line. Examples are in various medical school collections. One was even appraised on the American Antiques Roadshow I believe in 2012.