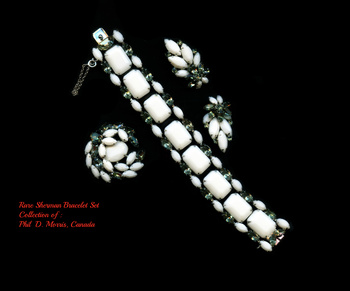 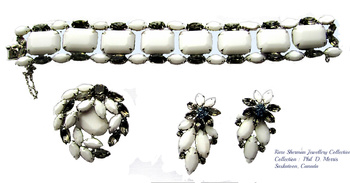 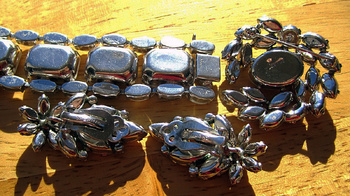 Signed Sherman Opague White Bracelet Set, Circa 1960
In my posession November 11, 2018 This beautiful set is rarely, if ever seen. The first time in my collecting I have seen this bracelet offered. Sherman used LARGE opague stones so seldom, I had to get this example. There are only 2 pages in the (Sherman) book of black and opague white jewelry pieces. Especially rare are the large rectangular white stones. I received all 4 pieces of this set together, and all are signed. Usually I might date this set about 1950, possibly earlier, but here the signatures match more his last known signature so I put the date to 1960. I strongly believe this may be a one of set which I think Sherman did regularly, possibly for a special client. This set is delicate but possibly for a youger woman, the bracelet for a smaller wrist !~

Sherman had many competitors. These were mainly Continental, Keyes and Artistic being the best known in Canada. I have some of the Continental and love some of their bracelets. Sherman offered but one line with the same high standards of excellence. His tag line emblazoned on tags and boxes read, "Jewels of Elegance", summing up his approach to excellence. He used NO other words to describe his jewellery, although there have been other Jewellery stores who went out on a limb making other claims for Sherman in their advertising. He did not design lines for the seasons but instead used colour or design theme, using lower price points which did not break his high standard of excellence.

Sherman made the finest jewels without use of glue and all stones were hand set, some of incredible complexity and design that would be too hard to duplicate so there are really no fakes out there. I did find some interesting info put out by family records, incredible nasty things which were removed from the internet. I have read other things which to me suggest that the only real person who knew what went on was Gustave and his wife.
Unfortunately the fad of rhinestones ended and his business closed in 1981, leaving no records behind !~