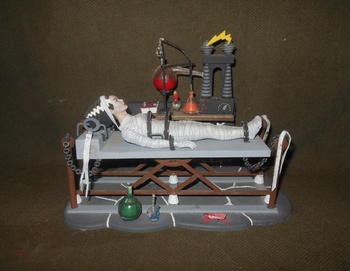 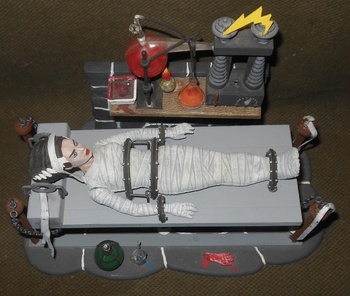 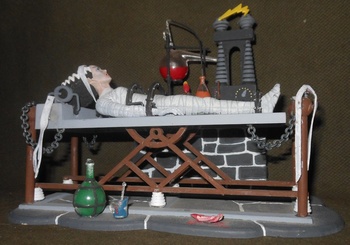 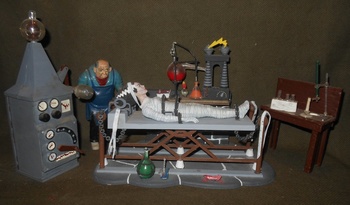 Just in time for Halloween! Well close enough, would have been better to find this last month but this is still a great find.
This is the Polar Lights recast of the classic Aurora kit Bride of Frankenstein. Originally made in 1965 it was never made in the numbers that the kits like Frankenstein, The Wolfman, Dracula and others of their first generation kits. The second generation kits were a smaller scale and more complex like The Witch. In addition the mold was destroyed in a train accident when the company was sold and the molds being shipped to Monogram Models. Many molds did survive and those kits are less valuable as they continue to be produced. Polar lights recreated this model using the pieces of the original model and pretty much the only way to tell is to look at the base which I did. A bit disappointed that it was the Polar Lights version but shaves a hundred or so off the price.
This model was built up and painted and it is a really great paint job. While painting models is fun it is rather time consuming and this is difficult model to paint. I bought one of these kits long ago built it and it fell apart. Turns out a different sort of cement is needed. Never got back to putting it together but I can use the parts to spice this one up a bit, add a few more beakers and bolts of electricity.
In the last photo I added some Monster Scenes pieces also Aurora and this time original. It's alive, it's alive!