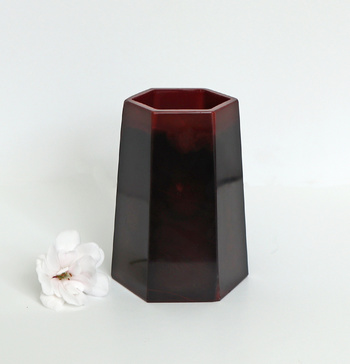 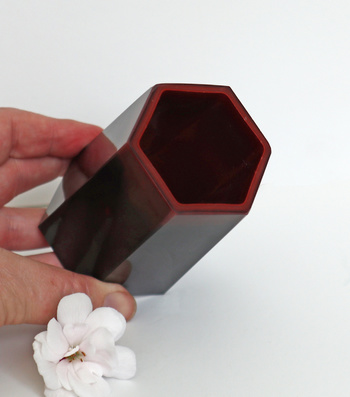 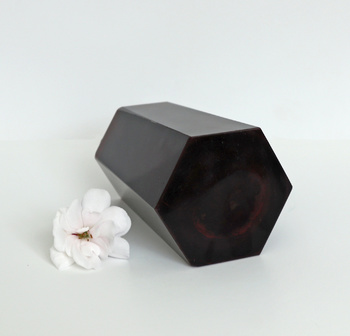 I love the purity of form of this vase, and have wanted one for many years; keeping my eyes open finally paid off! This vase was made by one of my favorite glass makers, Rindskopf, c. 1900, and is made of a beautiful and very dark red opaque glass that is blended with brick red closer to the rim. It stands 3-5/8” (9.2cm) tall.

I have seen this type of glass referred to as being Rindskopf’s Diluvium decor, but examples of Diluvium that I have seen are usually matte (often carved), and also include a sort of greenish-tan colored glass within the deep red. I would instead say that this vase is Rindskopf's version of Lithyalin, a type of glass that imitated semi-precious stones, and that was invented by Egermann.

Some examples of Rindskopf’s use of geometric shapes such as this one can be seen in the book Moderne Gläser by Gustav Pazaurek, 1901. (And also, just to note, Rindskopf’s diluvium is described in Pazaurek as being ‘rot- grünem’ or ‘red-green’.)
This vase is very glossy and appears to have been cut to shape at the corners; the edges are very sharp and precise. It does look like it was cut from a solid piece of stone!

My husband is an engineer & designer and is drawn to geometric shapes; he admires my Rindskopf collection, but loves this one so much that he has claimed it as his own. For all of his support of my glass collecting over the years, I was happy to oblige him with this one! :)