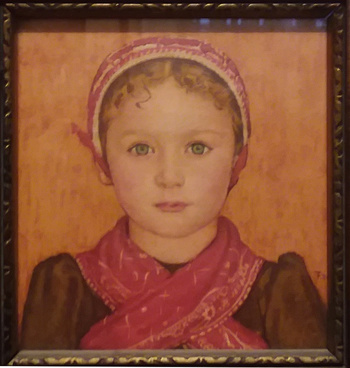 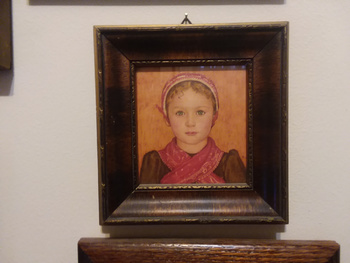 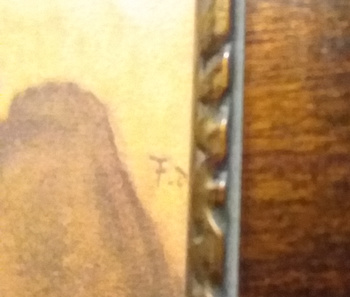 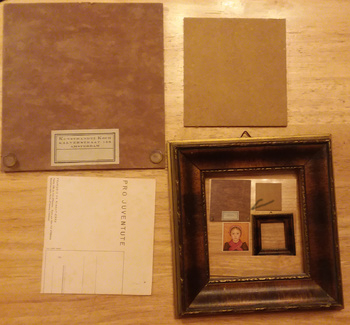 This little watercolor is 3.5" x 3.5". It is signed, but the signature (F de ?) is partially under the mat by her left shoulder. It is so well framed and backed and I love this little painting so much, that I just never had the heart to tear it apart to investigate. I found it at a thrift shop for a dollar or two a few blocks from my home. This shop received a lot of donations from the estates of elderly folks, especially WWII aged folks. I found a lot of nice art glass in that shop. I've always suspected this little watercolor was brought back by a soldier from WWII, but can't prove that.

In 2009 I was contacted by an elderly man in Europe who saw this on my art collection web site. He said he remembered seeing this painting in Europe in the 1930s, but could not remember where. I do not show the frame on my web site but he was able to describe it. We corresponded for some time and then I heard no more from him. I entered it in the international database for looted art in 2009 but never got a hit. It has also been on my art collection web site for over ten years. It hangs on the wall of my office. I call her "Amsterdam Girl" since that is where she was framed. At one time, I did a considerable amount of research and found who I think was the artist, but I have since forgotten who that was. He was a well known Dutch artist. I really don't care who the artist was or if this is valuable. I love "Amsterdam Girl"!

Here is some information on the gallery owners/framers:

Kunsthandel Gebroeders Koch was specialized paintings of the romantic period and the Hague School (Het Vaderland, 16-12-1972). They were also active as a frame and mirror maker (Algemeen Handelsblad, 28-10-1904). Gebroeders Koch art dealership was founded in 1850 by Isaac and Alexander Koch. The two daughters of Isaac Koch, Sophia and Dina, married to the Hartmann brothers. Mauritz Hartmann took over the company of his father-in-law. Through this part of the family the company became Anthony Hartmann's property. He managed the company since the seventies; see Rotterdams Nieuwsblad 23-10-1975

Working period
1850 - 2003
Founded in 1850 by Isaac and Alexander Koch Amsterdam (Collection of Press Documentation). In 1869 they founded an office in Rotterdam, where the orders were managed. Around 1900 the company expanded and owned three shops in Amsterdam and in Rotterdam, The Hague, Haarlem, Arnhem and Leiden. Later this was reduced to three shops, one in Amsterdam, Rotterdam and The Hague (Rotterdams Nieuwsblad, 23-10-1975). In 1975 Kunsthandel Gebroeders Koch was managed by Anthony Hartmann and they celebrated the 125th birthday of the company (Collection of Press Documentation)

This painting is not for sale! I am a collector and do not sell from my collection. When the time comes, I will donate this painting to a museum, if I can find one that wants it.

Update: I finally decided to go ahead and open the frame to see if it would solve the mystery. It turned to be a very fine lithograph on a post card, perhaps done in a limited edition to commemorate a gallery show or some other event. There was enough identifying information to identify the artist, title of the work and to locate one other example. The original that this lithograph was copied form probably hangs in a museum somewhere.

It is a very nice small lithograph and looks much better now that I was able to clean it up.