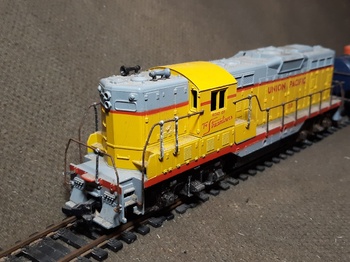 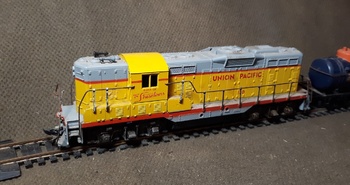 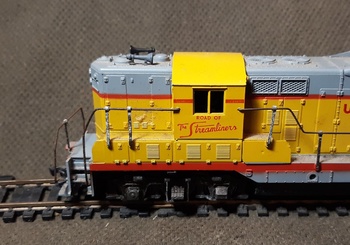 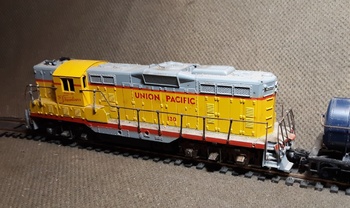 The GP9 is one of my favorite locomotives due to the high hood. For some reason train fans are big on the high hood units and I am not exception. With a high hood unit the view from the cab is blocked by the front hood. Luckily the unions made them retain the fireman. I think the low hood units started around the late 1950s. These were made from 1954-1963 and were very popular. They were made by EMD (General Motors) and had 1750 HP. The GP in GP9 stands for general purpose. They were known as road switchers and could be used as road or switch engines. Took a lot more of them to pull a freight train than the current 4400 HP locomotives but it was done.
An interesting point is that the end with the seen in photo #3 was the front but they were often used with the back end as the front of the train. Engineers were used to steam locomotives and felt more secure driving it backwards. The seat swivels and the controls are on the side of the engineer so it was not all that difficult.
As for this model it was made by Athearn and has the flywheel drive. That makes it start and stop realistically. It will slowly start and roll to a stop as opposed to stopping as soon as stopping soon as power is turned off. It is painted as a Union Pacific locomotive one of my favorite lines. This is circa 1960s/70s due to the connectors.