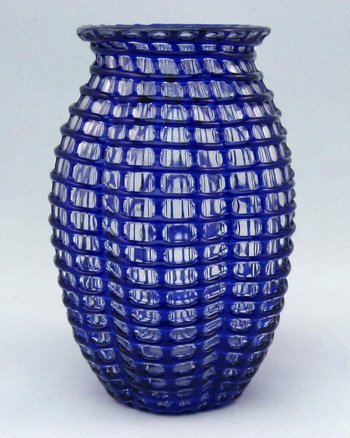 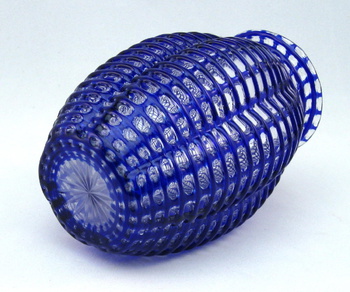 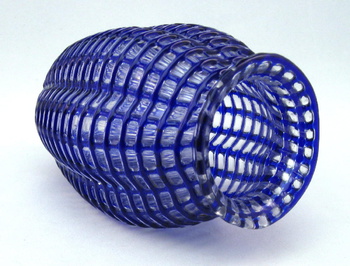 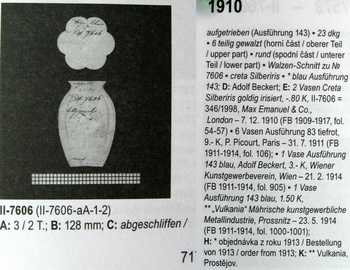 From 1910, Series II Production Number 7606 Loetz Ausführung 143 in cobalt blue. This is the first one I have found. It was on eBay with a generic auction title, but the gallery photo jumped out at me. There were several other contenders after it before the end. There is a white one in the decors section of the loetz.com website, and a blue vase is shown in both the Cantz and Ricke books. You will notice that the vase is "melon-ribbed" with 6 indentations which match the form of the one on the paper pattern. Cobalt blue threading stands proud of the surface. The Ricke and Cantz books suggest that Eduard Prochaska was the designer of these, which would make sense, as they are similar in design to the gold "basket" bowl I posted on CW a couple of months back. From the text that is with the paper pattern it suggests Adolf Beckert. I am not sure which it is, although the newer attribution most likely used additional documentation such as invoices.

There is a wheel-cut star pattern on the bottom, and the vase has a fire-polished rim, which indicates to me that rather than just grind and polish a pontil, they used the star to cut away any evidence of a pontil scar. In addition to giving it a level surface on which to stand, it adds to the appearance when viewed from above. This vase measures slightly under 5 inches tall.

The composite photo, #4, was taken from Loetz/Series II by Jitka Lnenickova.