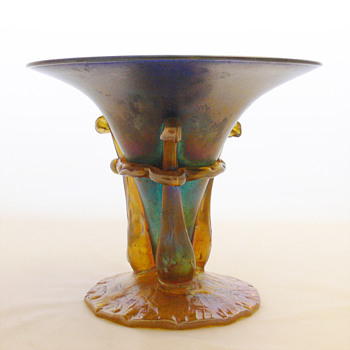 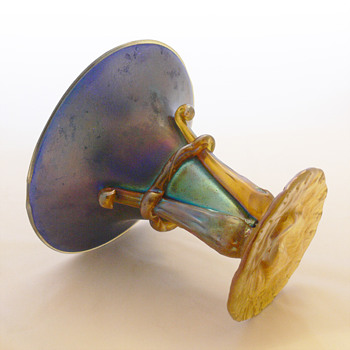 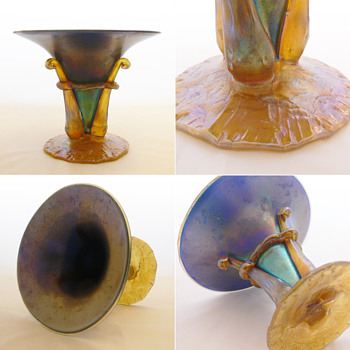 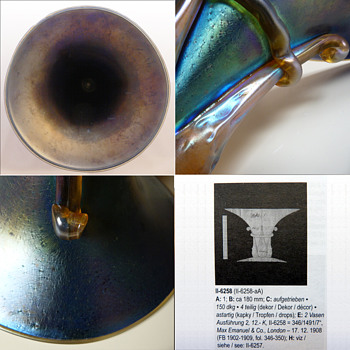 In the Jitka Lnenickova's book on Lötz there is an image of the pattern paper for this vase. It seems only two pattern papers for this design (one for an 18 cms tall vase and other for a 10,5 cm tall version) have been preserved, and they belong to four vases (two for each size) that were made in 1908 for Max Emanuel & Co., London, in the décor Ausfürung No.2, with the drops in Astartig and the foot in Candia Silber Irisiert.

In our vase, the décor is different: the cone shaped cup uses two different decors: COBALT SILBERIRIS (or perhaps DELPHI, or NORMA… they’re SOOoooo difficult to identify!) on the outside and GOLD IRISIERT on the inside. So we have got a blue surface outside that goes from turquoise blue at the bottom to dark cobalt blue with purple and gold reflections at the top whereas the inside looks dark with a golden iridescence. A rim in CANDIA SILBER IRISIERT has been added to the cup (you can appreciate that on several of the pictures). The drops and base, just like those in the Max Emanuel vases use the ASTARTIG décor for the drops and CANDIA SILBER IRISIERT for the foot.

The foot is textured. It’s got radial incisions and semi-circular marks, looking like scales, which seem to have been done pressing the glass with a curve instrument. The polished pontil on the base has a funny clover shape due to its irregular shape.

It seems that shapes ressembling this were used in the 1920s with different decorations. We cannot tell if ours come from the 1900s or the 1920s, although the coincidence of shape and the kind of decorations on it makes us think of the first option, sometime around 1908.

If anyone has wider info about it we'd be very thankful!