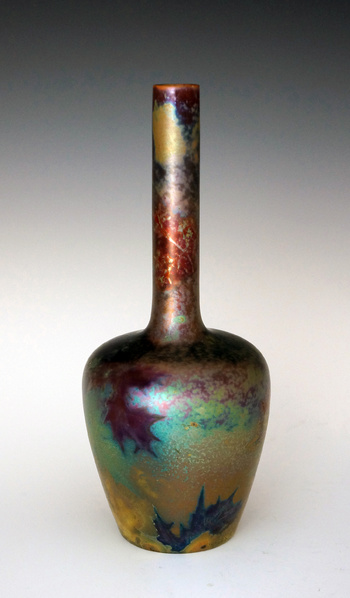 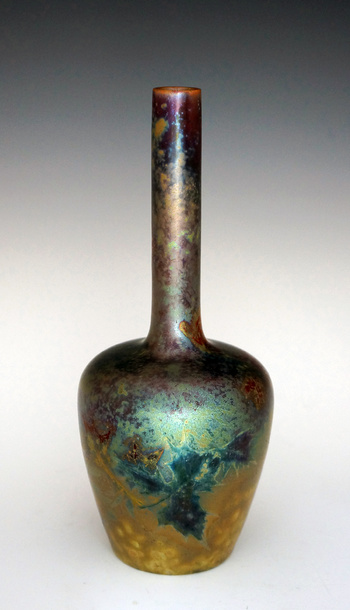 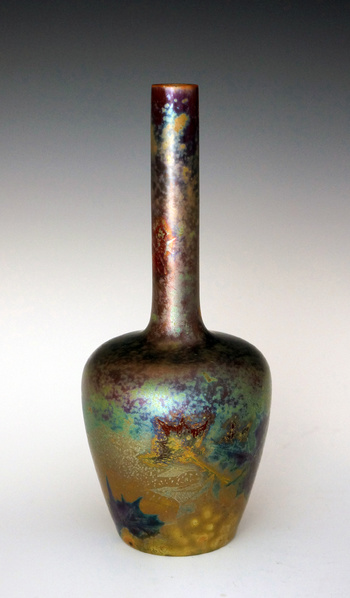 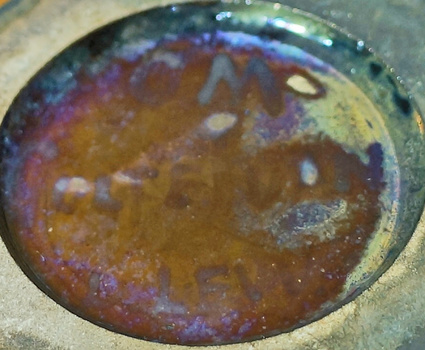 The ceramic vases produced Clément Massier's Southern France studio were essentially an earthenware "canvas" upon which Lucien Lévy-Dhurmer was given the opportunity to demonstrate his design talent and early interest in natural forms so typical of the French Art Nouveau. Rendered in the highly desirable iridescent glaze of Massier's studio from the early 1890s, this vase is decorated with Lévy-Dhurmer's particular symbolist motif preoccupation of billowing fall leaves. Perfectly fired with a myriad of colors ranging from yellow to deep blues and reds. Painted inscription underneath, "CM, Golfe Juan, L. Levy." Dimensions: 7.10" (H) x 3.25"(W).

Lévy-Dhurmer (September 30, 1865 - September 24, 1953) was a tour de force in the late 19th century to early 20th century Symbolist art movement. He is also recognized as being one of the foremost French artists of the Art Nouveau era, and as with many of his contemporaries, he was not content to practice his artistic talents within a single medium. Lévy-Dhurmer is known for his paintings, drawings, furniture, interior design and ceramics. It is through this latter medium that he began his artistic career.

From 1886 to 1895, Lévy-Dhurmer was the primary ceramic decorator and then later overall artistic decorator at Clément Massier's palatial studio in Golfe-Juan, France on the Cote d'Azur. His early work for Massier was generally unsigned, but characteristically rendered in an etherial manner, generally involving detailed natural subjects and presaging his growing interest in Symbolist art (as can be seen in the vase above). Co-signed Massier pieces by Lévy-Dhurmer began around 1892, when the artist assumed the prized position of artistic director.