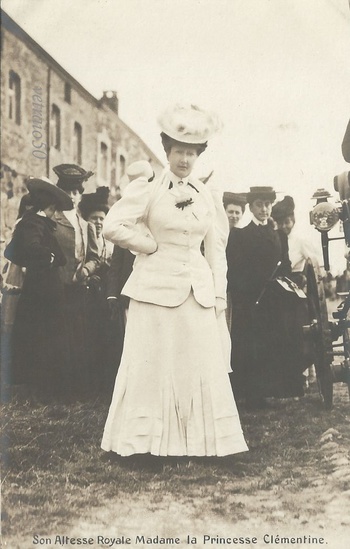 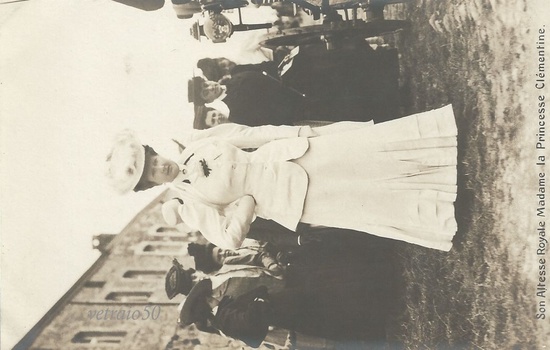 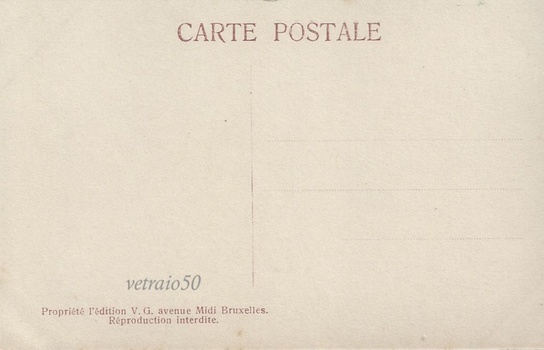 The white dress gives it all away it seems! While researching this card I found a comment about the contrast between the black dresses of the women in the background (or blackground) and the defiantly white tailored outfit of the S.A.R. Madame la Princesse Clémentine. It seems only the rich could afford to wear white. It was just so “unserviceable”!

The entourage seem rather impressed by her!

She has struck quite a pose for the cameras in the open air!

The Millers would have collected this card in 1907 so the image must date to c.1900. By this stage Her Royal Highness would have been in her early thirties. Because of the death of her mother in 1902 she had taken on the role of Belgium's First Lady.

She was the youngest of the three daughters of King Leopold II of Belgium. Leopold II had one son but he had died at the young age of 9 in 1869. Leopold’s attempts to have a male heir were thwarted by two more female births ..... a second daughter Stéphanie and a final attempt Clémentine.

The succession was to fall to a male heir: the son of his brother Philippe. Until very recently, the Belgian succession was governed by Salic law: women could not inherit the throne.

Leopold had three daughters – all Catholics! The elder two daughters married well into Catholic royal alliances. The eldest Princess Louise had an arranged marriage with her much older second cousin, Prince Philipp of Saxe-Coburg-Gotha. The second daughter Princess Stephanie went to Vienna too as the wife of the romantic and moody dreamer, Crown Prince Rudolph.

The youngest Clémentine as a teenager fell in love with her cousin Prince Baudouin, who was also her father's eventual heir. “Raised almost single-handedly by their mother, Clementine had grown up to be a dutiful young woman. She was deeply in love with Baudouin, but he was less keen on the match. As they moved toward an engagement, Baudouin continued his romantic liaisons with the ladies. Suffering from the flu, he willingly accepted a challenge from his mistress' husband was wounded on the so-called field of honor. Within days, he was dead, and Clementine was left to nurture her broken heart.”

A duelling accident - Baudouin died in Brussels on 23 January 1891!

What becomes of the broken hearted?

“After her heartbreak over Baudouin, Clementine was allowed to begin travelling. Unlike her sisters, she took no lovers and started no scandals. Instead, she fell in love with Prince Victor Napoleon, heir of House of Bonaparte. Leopold opposed a marriage between them, wishing to avoid poor relations with the Republic of France. Clementine argued with him, but lost. Instead of rebelling, she returned home and assumed the duties of her father's first lady, when Queen Marie Henriette died in 1901.”

Clementine had to wait until after her father’s death in 1909 to get permission from her cousin King Albert I (Baudouin’s younger brother) to marry the man she loved Prince Victor Napoleon who had also never married. She did not marry until age 38.

“The couple had two children and lived a blissful life together in Brussels, until World War I when they escaped to England and Clementine joined the Red Cross. After the war, they returned to the continent. He died in 1926, and Clementine survived him by nearly 30 years. She continued her charitable work, ultimately earning the Legion of Honor.”