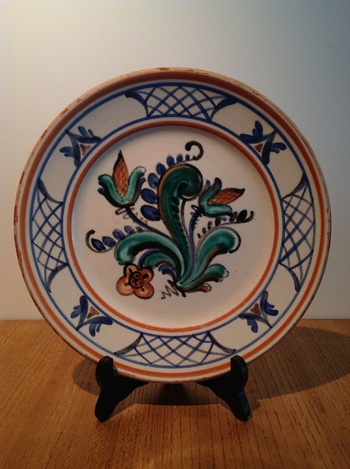 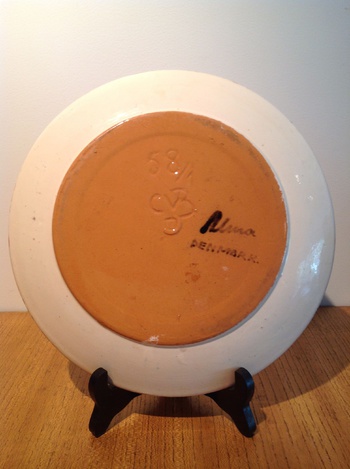 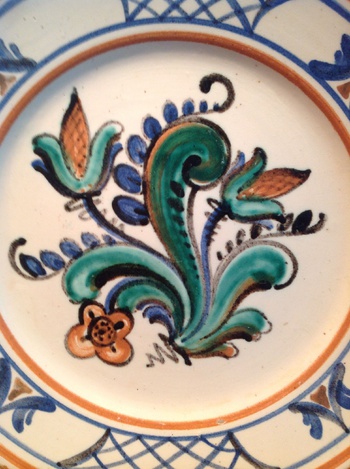 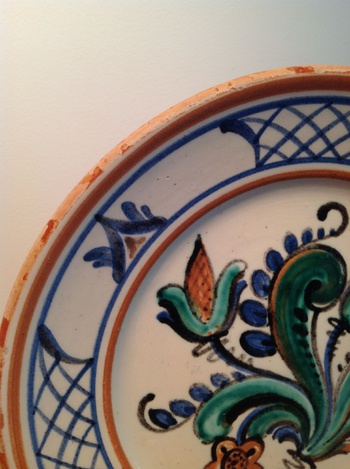 The faience plate came from the Salvo's more than ten years ago! But its identity eluded me for years until some CW mates solved the mystery with these comments from Elizabethan: "It's C. V. Brack from Traastrup, Denmark."
and Jensen added:
"Yes, Elisabethan is right: Alma Andersen & Søren Klein Rasmussen owned 'Alma Keramik' and the pottery was manufactured at Brack and Sons (Carl Vilhelm Brack) in Taastrup (about 20 km from Copenhagen)."

However further clarification came from the grandson of Alma & Frederik :

"I have to make a correction.

Their son was named Søren and is a potter in his own right.

The dish was produced by Brack and sold unglazed to Alma who the decorated it. It is from before the war, sometime in the late 1930's and while Brack & sons was in Taastrup.

Alma Keramik was located in Vanløse in Copenhagen.

Alma & Frederik were my grandparents and Søren is my father."

The green in the floral decoration is a form of lustre.

The marks on the back of the plate are both impressed and painted. I can see "58/1" & "C v B" but there is more to that impressed mark than that! These letters are those of Carl Vilhelm Brack - the maker of the blank.

It also says Alma / Denmark. The Alma mark is for the Alma Pottery in Vanløse in Copenhagen. But it also indicates the decorator : Alma Andersen.