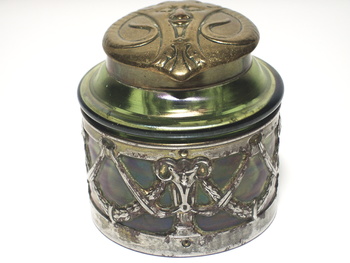 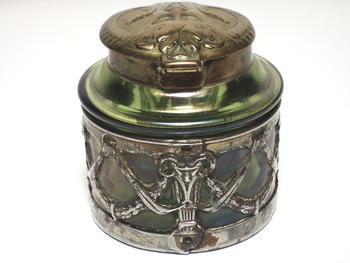 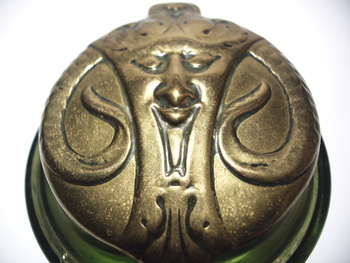 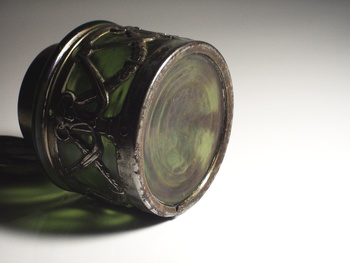 Hi
Everyone.
I found this little Austrian Art Nouveau Inkwell few weeks ago, i am ready to post it, after do some research i am confident to mention, this Inkwell was attributed to STOLZLE, i will love to say LOETZ, but no not this one, very nice green iridescent colour, with the lid representing a figure with horn, the same figure on the metal mount surrounding the glass, i have not test the mount to see if this is silverplate on brass, the lid show lot of wear let me think this inkwell was from late 19 century, early 20 century, the mall insert was present inside.

On June 15, 1805, Karl Smola the Oberdorf glassworks in Bärnbach. In 1835 Carl Stölzle founded two glass factories in the Lower Austrian Waldviertel . 1848 The Oberdorf glassworks to "kuk" Glashütte - ie a company of national interest. 1867 Been seven glass factories in Austria, Bohemia and Hungary. 1871 was glass factory Köflach founded. In 1900 employed Stölzle to 1100 skilled workers, 1000 day laborers and 80 sellers, after the end of the 1st World War and the collapse of the monarchy fell apart and the Stölzle-consolidated companies, after the end of WW2 an additional three glass factories were spun in the former Czechoslovakia.

Since 1989 when the Austria Glas Recycling GmbH together with the Swiss Vetropack was founded - the Vetropack had 1986 the glassworks Pöchlarn taken in Lower Austria from Stölzle - is Stölzle-Oberglas also for the entire packaging glass - recycling charge in Austria. The separate packaging glass is almost completely recycled in Austria, exports demand and quality-related residues for recovery in the neighboring countries Italy, Germany and the Czech Republic.

In 1996, the privatized and now insolvent successor to the formerly largest glass producer was DDR , the state-owned Kombinat Lausitzer glass in Weißwasser adopted, has since been trading under Stölzle Lausitz and produced with approximately 230 employees drinking glasses for the highest standards.

Between 2006 and 2008 there was an expansion of production capacity of Stölzle-Oberglas GmbH to three lines and a conversion of white glass tank of recuperative on regenerative melting technique.

On Christmas Eve 2009, the Stölzle-Union was largely destroyed by a fire. 2010 has been re-presented the work at the ceremonial opening of the reconstructed within seven months work Stölzle-Union as a flagship for the manufacture of pharmaceutical glasses in the STO glass group. Almost simultaneously Stölzle Flaconnage has undergone a facelift. It received a new customer; the production and decoration possibilities were expanded. Furthermore, the sales companies are at this time Stoelzle Glass USA Inc which has offices in New York and Ohio, Stolzle France SAS in Paris and Stoelzle Glass LLC established in Moscow.

2011, a second white glass furnace was built at Stölzle Czestochowa, expanding production capacity. The glassworks Oberglas Bärnbach GmbH is in a shop Glashütte converted . The employees will be taken at the factory in Köflach mostly.

2012 saw the founding of Stölzle gallery as an artistic and cultural center in the West Styria in the former premises of the glassworks. The Stölzle Glass Centre continues to show in collaboration with the association Styrian Glass Art Center in the show glassworks traditional manufacturing of blown glass. The end of 2011, sales in the Group amounted to € 185 million.