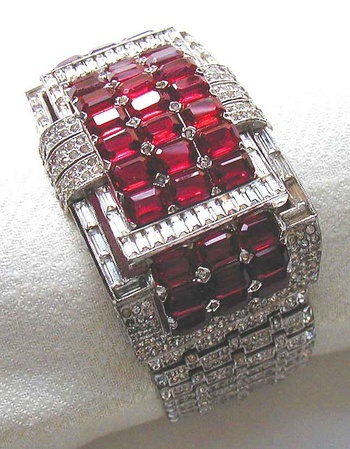 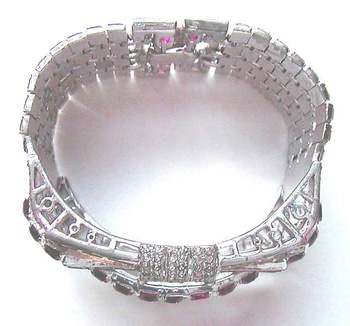 For my 100th post, I thought I would go back to my original jewelry collecting interest -- costume jewelry. Costume jewelry has always tracked closely with fashion and some of the most beautiful has emulated real jewelry, providing an affordable alternative to "the real thing."

This amazing bracelet is c. 1937 KTF/Trifari, designed by Alfred Philippe. One of the rarest of the rare KTF Trifari, it is an Art Deco-styled faux ruby and diamond bracelet that is a copy of a Van Cleef & Arpels produced in 1936. The craftsmanship of this bracelet is superb -- beautifully cut rhinestones in many shapes, set in rhodium-plated metal. The bracelet is 1 1/4 inches wide. It is unsigned, not uncommon for Trifari pieces in the 1930s. I have seen this with green stones and assume there was most likely a blue version also. Jewels of Fantasy has a clear-stone version.

A great NY friend of mine, who is an amazing researcher, traced the bracelet to a Van Cleef drawing shown in Sylvie Raulet's book Van Cleef & Arpels. This bracelet was shown in a 1938 Life magazine article on "Junk Jewelry". You can also see a clear (but unidentified) version in Jewels of Fantasy, by Deanna Farnetti Cera, pg 172.

One of the best jewelry firms was TKF/Trifari. It was originally started by Gustavo Trifari, an Italian immigrant to the U.S. who went into business with Leo Krussman somewhere around 1918, and who were later joined by Carl Fishel. TKF was an abbreviation for the last names (Trifari, Krussman, and Fishel), but the firm name was later established simply as "Trifari." Their initial jewelry was (inconsistently) stamped kTf, starting in 1935. Trifari has had many spectacular designers, with Alfred Philippe as head designer for many years and who was listed on most of the design patents issued to Trifari. Other top designers included Alfred Spaney, Norman BelGeddes, Bennetto Panetta, Joseph Wuyts, and later, Marcella Saltz, Diane Love, Jean Paris, Jonathan Bailey, Kunio Matsumoto and Aldo Cipullo.