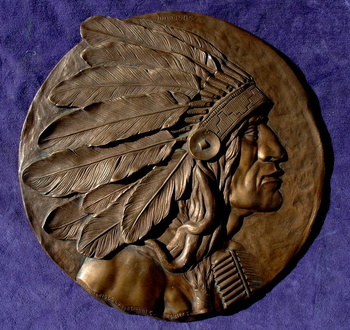 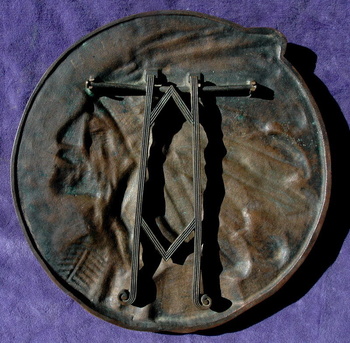 Once again I find myself unable to resist buying something that falls outside of my "normal" area of collecting! This time it is a very large (a full 9 inches in diameter) and beautifully cast bronze plaque depicting a Native American Indian. It's clearly dated June, 1905 (both at the top center, and at the bottom where it reads: "copyright 1905 by the National Cash Register Company").
The artist's name ("Schutte") is also inscribed in the bronze (right under the last two feathers at bottom left).
A bit of online research revealed that this was given as a prize to the company's top salesman of the year. There are several fakes & forgeries out there, but they can clearly be identified by the substandard casting and total lack of exquisite detail seen on this 112 year-old original. This one even has its original built-in "stand" on the back.