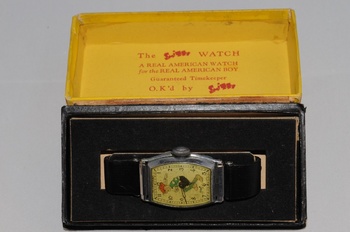 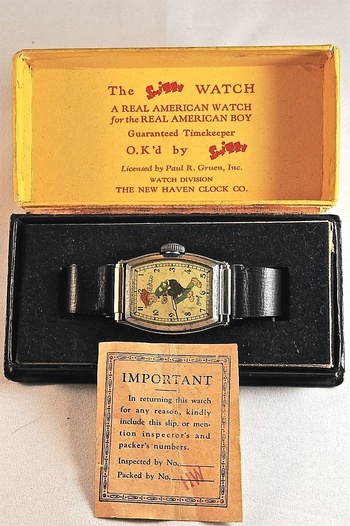 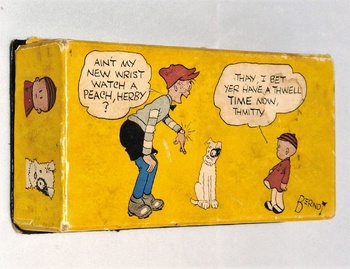 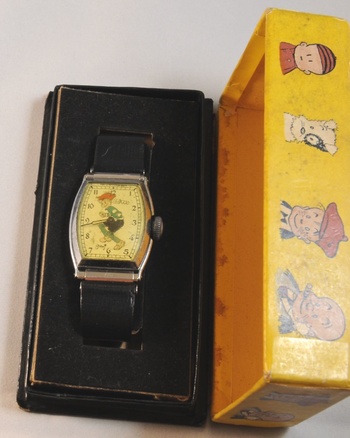 Hello Fellow Collectors and Visitors. I haven't been around for a couple days and for a return post, I thought you might enjoy seeing something other than a Mickey.....lol.
This watch was produced by New Haven Clock in 1932/35 and was inspired by the Comic Strip "Smitty" of the 1920's-1973. Here's an out-take from "Wiki":
Smitty was a popular newspaper comic strip created in the early 1920s by Walter Berndt. Syndicated nationally by the Chicago Tribune New York News Syndicate, it ran from November 29, 1922 to 1973 and brought Berndt a Reuben Award in 1969.
Berndt's first strip, That's Different, drawn for the Bell Syndicate, lasted less than a year. In 1922, he created Smitty, which he continued until 1973. Yet it did not begin without a struggle, as cartoonist Mike Lynch described in a 2005 lecture:
After a stint drawing sports cartoons under T.A. "TAD" Dorgan (If you look at Walter Berndt's signature, you can see he draws his "T" just like TAD did), he took over the And the Fun Begins panel from Milt Gross. By 1920, Berndt had left the Journal to start his own strip. The strip lasted a year. Then he worked at The New York World. But within weeks, he was fired for insubordination. (I tried to find out more about this, but this is all I know.) Berndt was out of work and broke. So, with zany cartoonist timing, he got married! And then he began making the rounds with a new strip titled Billy the Office Boy. It was 1922. The World Series was on. Big news, and so no one could get near the editors. Berndt couldn't get in to see anyone. Segar said there wasn't a World Series in Chicago and suggested he send the proposal to Captain Patterson. So Berndt mailed the strip to the Chicago Tribune. Patterson, opening a phone book for reference, renamed it Smitty and bought it at Berndt's high asking price. The strip became a mainstay, with the adventures of Smitty and Herby continuing for over 50 years.
Thanks for looking,
Kerry