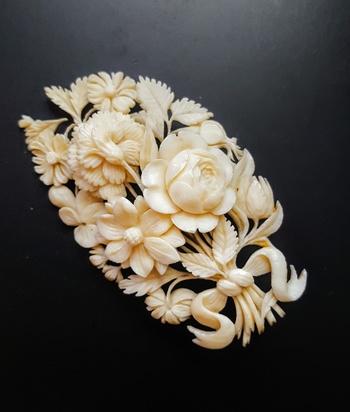 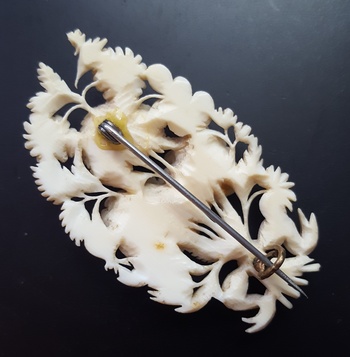 Dieppe is a haven in Normandy, France, and was for centuries a center for carving the ivory which came from Africa by sea.

A little lack on top end, awful epoxy glue on the replacement pin insert, but I won't try to ?epair that!

Seller didn't described the fact the C clasp was closed... impossible to insert the pin!

That was my only careful kyratisation: curve the metal using two pinches not to break anything... brrr!

I love elephants, and the fact they are protected and ivory being now banned. I only buy antique pieces, and when they are so finely executed, I consider this is a tribute to these magnificent animals to not discard such pieces...
What makes me very angry is to see crudely, poorly executed modern/vintage ivory pieces! Shouting: "a poor elephant was killed for nothing!".
Seeing too much people confusing molded resine with real ivory... no need to kill animals to satisfy average people's taste...