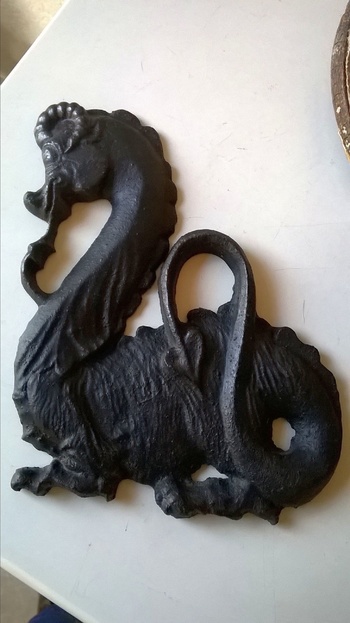 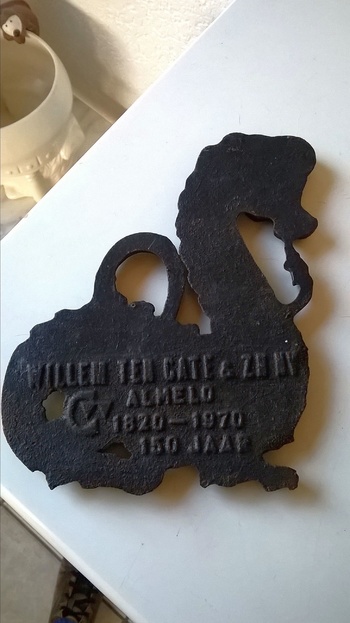 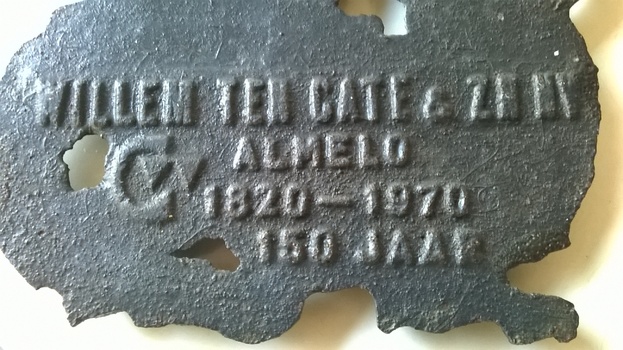 I saw this great cast iron dragon in a local thrift shop last week and could not walk away. The history of the former iron works company is explained in this website: http://www.bennink-tencate.com/en/history/

"Willem ten Cate en Zn. was founded in 1820, in Almelo, the Netherlands. Initially specialising in the manufacture of cast ironwork for the textile industry, since the turn of the 20th century, they gradually migrated to the specialist production of cast ironwork for sewage systems, for example, manhole covers.In 1960 a branch was opened in Heerenveen and in 1970 the firm was taken over by Verenigde Bedrijven Nederhorst. At that time the production consisted mainly of cast ironwork for sewers, with a production volume of about five thousand tons a year. However, this move proved to be unsuccessful for the firm and eventually lead to the closure of the foundry at Almelo and the moving of the headquarters to Heerenveen.
In 1972 Ten Cate took over the stainless steel foundry Stork Volma at Gorredijk from VMF. This meant a departure from the sewage works market and a specialisation in casting stainless steel and cast-iron for the machine industry among others.
With bankruptcy looming in 1975 for Ten Cate and Nederhorst, the company was saved by a share takeover from the Company for Northern Development (Noordelijke Ontwikkeling Maatschappij or NOM) in Groningen, providing Ten Cate with sufficient funds to realise essential investments.
In 1981 the first reconstruction of Ten Cate took place. Among other things, the building of a modern laboratory made it possible to greatly increase the variety of materials the company was able to process.
In the first half of 1983 Brons Industrie in Appingedam brought all of her foundry activities under the Ten Cate fold. his led to a vigorous restructuring of facilities, taking place at the end of July 1983. From that moment on the large scale and high-quality cast work for Brons Industrie could be processed and Ten Cate commanded a highly equipped and flexible foundry, able to produce high-quality cast works in a broad array of different materials.
Since 1919 the Bennink foundry in Nijmegen has been specialising in the casting of stainless, heat-resistant and non-wear cast work in iron and steel. Furthermore, their production encompasses copper-, nickel- and cobalt alloys. They also supply unalloyed or light-alloyed cast work and steel.
The modern induction ovens, heat treatment facility and intensive quality controls together with great craftsmanship guarantee cast work of the best possible standards.
The Bennink foundry planned to build a new foundry at the start of the 1990’s, but decided instead to take over Ten Cate in 1992. The experience and know-how of both companies were joined together and the Bennink & Ten Cate foundry was born. A successful takeover that has had craftsmanship and a professional passion at its heart ever since."