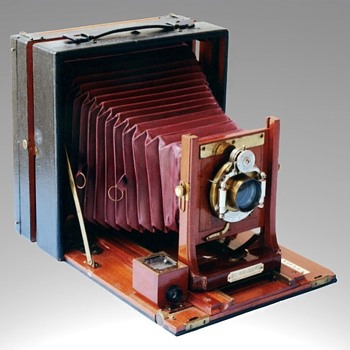 This Tele-Photo Cycle-Poco is another camera that used to be in my collection and rediscovered in some old pictures (long before digital photography). Self-casing, red bellows folding cameras such as this were originally a uniquely American design and very popular throughout the 1890s.

The basic design pattern for this leather covered, polished mahogany 5 x 7 inch glass plate camera was extremely popular and similar to another series by the name of “Premo” (more on that in a bit). The Poco line of cameras first appeared in 1895 by the Rochester Camera Mfg. Company. The uncommon company name variant appearing on this camera’s badge is the “Rochester Camera & Supply Company”; which was only around for a couple of years (1897 - 1899).

And a bit of trivia explaining why “Rochester” marked cameras can be somewhat confusing even to experienced collectors ...

In the 1890s, there were two “Rochester” camera companies operating in the region at the same time. The “Rochester Optical Company” (renamed from the "W. H. Walker & Co." when taken over by W.F. Carlton in 1883) introduced “Premo” cameras in 1893. The other, the “Rochester Camera Mfg. Company” was started by W.F.’s brother, H.B. Carlton, in 1891. H.B.’s company made Poco cameras.

So there you have it; two camera operations with similar company and camera names started by two brothers. Furthermore, Poco and Premo cameras look very much alike and are difficult to identify without their maker’s badges. But the story continues ...

The brothers’ companies merged in 1899 with three other builders to form the “Rochester Optical and Camera Company”. Then along comes George Eastman who, in 1903, bought the companies and renamed everything as the “Rochester Optical Company”, the same name as W.F. Carlton’s original 1883 company. Eastman then slowly absorbed this company into Kodak’s operations through 1917. All during this time, both Premo and Poco series cameras continued appearing in catalogues.

Whew ... and this is only a summary ... there were at least seven company name changes in all!