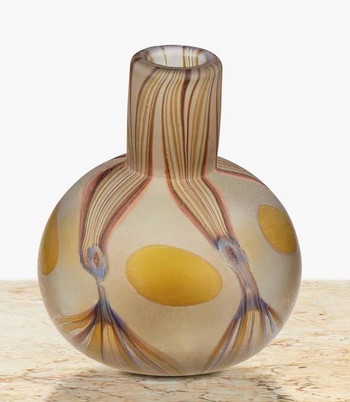 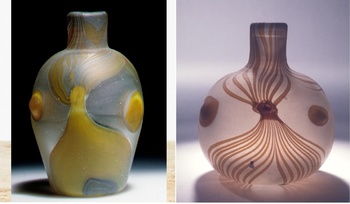 My entire life I've admired Louis C. Tiffany's blown glass, but as it's always been, shall we say, a bit cost prohibitive, it's generally been from afar. Years ago I did a deep dive on Tiffany's early glass, and even had the privilege to review the original Arthur J. Nash note books held at the Rakow Research Library at the Corning Museum of Glass to learn as much about his work as possible. I have an extensive library of research books on Tiffany's work as well, which as we will learn shortly, provided an essential clue to unlocking the mystery behind this little vase.

Lately a few recent acquisitions have driven me to go back to the genesis of their blown glass production, trying to absorb as much about their 1890's work as possible. In the beginning, it's clear that Nash was experimenting to the extreme to develop formulas and techniques to push the envelop beyond that of what he learned making glass in Stourbridge (although interestingly Tiffany Furnaces was originally called the Stourbridge Glass Company). Much of their 1890's production is almost clumsy and student like, yet mostly organic, free formed, one of a kinds, and anything but production catalog work like competing glass works were focusing on at the time. Much of his early work wasn't iridescent, and would be hardly recognized by most glass collectors as Tiffany Favrile glass.

One great aspect of Tiffany's early blown glass production is that a lot of it found its way into museum collections around the globe whom acquired it when it was made. These early Tiffany blown glass museum examples are great study pieces because they articulate the progression of Tiffany's work, and give critical clues for researchers of original, unfettered work.

After looking at scores of 1890's work in various museum collections, one can draw many interesting conclusions. It's clear that the early work was highly experimental, ofttimes almost sloppy to the eye, while remaining organic with interesting forms, and applications of glass making techniques which were fresh to the market, beyond anything other glass works were making at the time. Many of their early examples were not signed at all, and carried various forms of paper labels, some were numbered only, and various forms of signatures were used, if used at all. Clearly it was a period of self discovery as their techniques were being developed, and managed to work out various facets leading to the implementation of a more orderly system of processes and techniques. Much has been written around their various marks, Koch and others have attempted to decode their numbering system, publishing date estimates based on their numbering, and letter prefixes and suffixes, but it's not an iron clad infallible methodology.

Looking at the great examples in the Lillian Nassau Gallery, the 1946 Parke-Bernet Louis Comfort Tiffany Foundation auction catalog, museum collections, and other early collections, one can clearly see there was a fragmented system of marking their wares. As with most things glass, there's simply no absolutes.

This finally brings us to the piece at hand. I recently acquired this little 3" tall vase with another piece which were sold together as "Experimental Tiffany glass". I was really after the other piece, and my initial impression of this example was that it was unlikely to be Tiffany, but it was pending further research. I was spending countless hours researching early Tiffany, mainly due to other recent acquisitions, and while I was looking through my research library of Tiffany books, I was stunned when I spotted a little vase on page 169 of the Robert Koch book "Louis C. Tiffany Rebel in Glass." On the 100 plus year old black and white photo at the bottom of the page was a series of early Tiffany blown glass objects, and the first vase looked a lot like mine (see the black and white photo above with the vase circled in yellow). I turned back a few pages to learn that this glass was acquired by the Smithsonian Institution in Washington, D.C., who acquired 38 items of Favrile Glass made by the Tiffany Glass and Decorating Company in 1894, the first year of operation for the Tiffany Furnaces. These 38 pieces of Tiffany glass are far from what one would typically associate with Tiffany Favrile Glass.

The original Smithsonian description for the little vase I acquired, states "PLATE VI. From left to right: Bottle, h. 3-1/4", d. 3". Body of white crystal glass, the outside ground or etched (matte finish). Spherical body with a small cylindrical neck. Decorated with three tear-like patches of thick yellow glass; between these are three plant-like designs made up of narrow spreading lines of yellow, colored brown at their converging point." As I pondered this description, I thought, that reads exactly like the composition and design of my little vase.

Next I went to the Smithsonian website and did a search for "Tiffany vase": https://www.si.edu/es/search/collection-images?edan_q=Tiffany%20vase
Low and behold there was a vase that looks very much like the example I have. NOTE: the lighting isn't great on their photos, but it's far better then the old black & white photos in the Koch book, if you zoom in to look at the base, it tells all. Link to their example: https://www.si.edu/object/tiffany-vase:nmah_594517?edan_q=CE%252396439&destination=/search/collection-images&searchResults=1&id=nmah_594517

Description (Brief)
Favrile glass. Body is of white crystal glass, outside ground or etched. Decorated with three tear like patches of thick yellow glass, between are three plant like designs made of narrow spreading lines of yellow colored brown at the converging point.

Form: A spherical body with a small cylindrical neck.

It's clear that their photos are a bit aged (as is the vase) but as luck would have it, they published several photos of the vase, including a photo of the base. The base almost always holds relevant and important clues when researching a piece of glass, and the colors on the base are identical to my example.

Here's the clincher - My example is only marked on the base with the engraved number 4905 . Notice that the maker number on the Smithsonian Tiffany example is marked 4913, with paper labels only. Interestingly it appears to sport two different versions of the early Tiffany Glass & Decorating Company paper labels as one is clearly larger. The Smithsonian example really only differs in that the yellow orbs around my vase are flat, whereas the Smithsonian example's are raised. Their example is only eight production numbers later then my example, and the frosted/matte white crystal glass, and colors used on the decorating are identical, as is the bottle form shape.

These early museum collections can offer important insight and clues when researching glass that simply isn't available elsewhere, and many museum are gracious enough to have online photo databases of their collections for research purposes.

Ladies and gentlemen I present to you my latest, and quite possibly oldest Tiffany Favrile Glass acquisition.

UPDATE: I was able to locate another example of this design in the The Metropolitan Museum of Art in New York City collection.

Here's the details from the MET example:

The original donor is the same donor as the example in the Smithsonian collection. 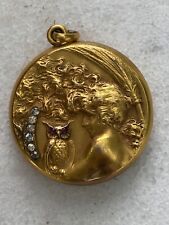 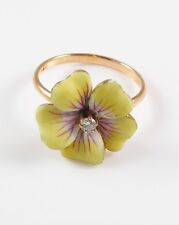 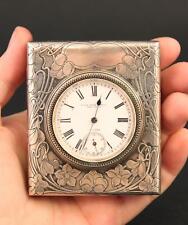