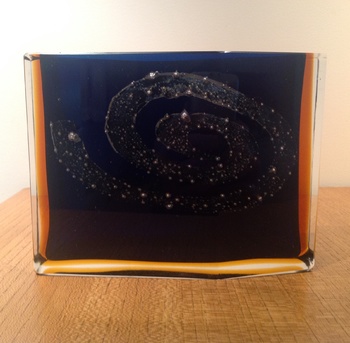 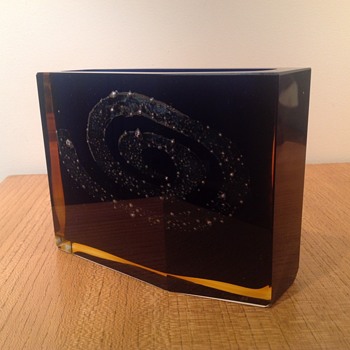 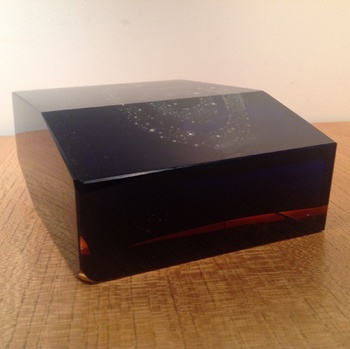 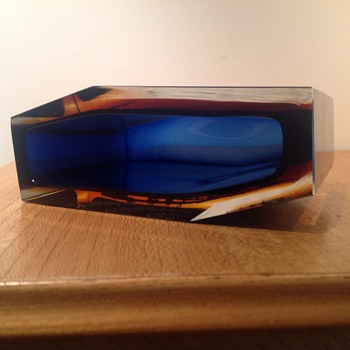 This was a Sunday morning market purchase at Kings Cross about ten years ago. It was the first of my purchases of modern Bohemian glass. It reminded me of a barred spiral galaxy. To me it reflects that new awareness of space and the new frontiers confronting those in the East and the West at that time; the Space Race and the Cold War. It was signed on the bottom Exbor. It is a double sommerso with silver chloride inclusions. It has six sides and has bevelled edges that reflect Bohemian glass cutting skills. To me it is very northern Bohemian quite different to the glass of the south-east.
Height: 13 cm / 5.1"
Width: 17 cm / 6.7"
Depth: 7cm /2.75"
At the bottom marked Exbor Czechoslovakia.

Over a period of time I was finally able to work out some more information about the firm Exbor. All of the information was in Czech. The name comes from 'export' and 'Bor'. 'Bor' is short for the city of Novy Bor which in German was known as Haida; a town with a long glass history.

I finally came across the name Pavel Hlava and some of the other famous names of Bohemian glass:René Roubicek, Jiri Harcuba and Karel Wunsch. Pavel Hlava (1924 – 2003) was one of the pioneers of contemporary glass sculpture in the Czech Republic. "Hlava is well-known for demonstrating the full potential of glass art using both cold-working and free-blowing techniques. Throughout his career, Hlava exhibited mainly in the United States and Japan."

Nationalisation of the Czech glass industry started in 1948. In northern Bohemia they founded a group known as Borske Sklo in 1953. It's head office was located in Novy Bor (Haida). A lot of small workshops were brought under the umbrella of this nationalized corporation, but also a few large and renowned companies like the Zahn works, Egermann-Exbor and later also Moser.

Borské Sklo played a major role in the showpiece exhibitions of Czech glass held in the 1950s and 1960s. Designs were simple, refined, practical and often quite colorful.

There's another similar vase on ebay that adds this information:
"An Exbor blue, yellow and colourless cased vase with silver and chemical inclusions. These vases can be found in a wide variety of cut shapes, colours and sizes, and also with different styles of random, internal abstract patterning. Created using silver chloride, similar chemicals, or metal filaments, the technique was developed in conjunction with Dr Jaromír Spacek, head of the glassmaking school at Nový Bor. The design won a Gold Medal at the Leipzig Trade Fair in 1967, and was nominated as being amongst the best products of the same year.
The vase is hand sanded and polished to a high gloss. This style internal decor with a combination of stylized blue evening sky with stars in the sky.
Designed by Pavel Hlava - Exbor Czechoslovakia in 1964"

There are reproductions being produced today by Egermann. I think that they do not have the Exbor mark. The bottom of the pieces is never shown. The inclusions are quite different and the variety of shapes and colours has developed as well.