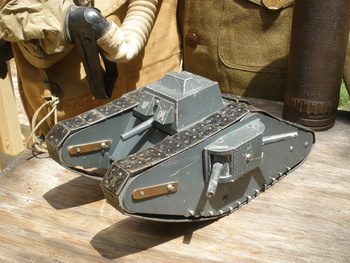 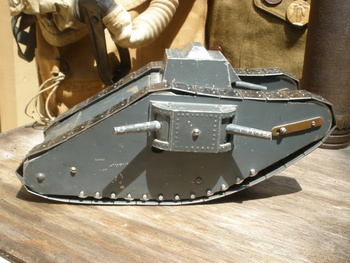 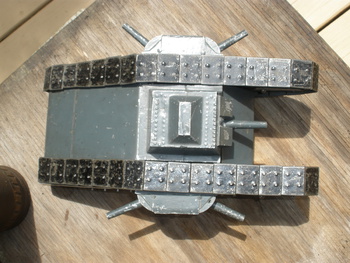 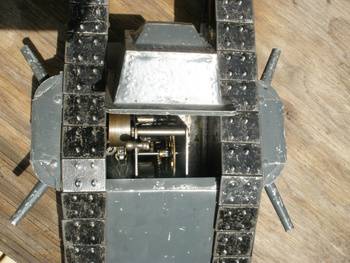 I think I have a new favorite tank :)

I've been waiting for one of these to show up for a very long time. I saw one listed at a Vectis auction back in 2006 and I'v been drooling over it every day since. I promised myself that if one ever came up for sale I would buy it come hell or high water. I saved for a month or two just to make sure I had enough (thankfully I didn't need NEARLY as much as I had prepared for).

I was waiting over a month for it to get here from Germany, but this last Monday it finally showed up. I brushed my family aside as they curiously inspected the massive box covered in foreign "fragile" tape. There were a few other toy tanks in the lot, so I pulled them out first (the Hausser tank was one of them) and saved this gem for last. I finally came to the last bubble wrapped blob and savored the process of unwrapping it. When I finally revealed it to the folks, even they (who are sometimes skeptical about my collecting... habits) were impressed with my new war machine.

This 11" long behemoth represents (to the best of the creators ability) a Mk IV style tank, probably right out of the newspapers of the day. Unlike the "male" versions which had two larger 6 pound guns, the "female" tanks had only machine guns and different sponsons that accommodated the smaller machine guns.

The construction is mostly steel sheets, but also what looks like a heavy aluminum panel on which the brass geared clockwork motor is mounted. The wheels, copula, sponsons, and guns are all aluminum, many of which are cast. This was obviously an early attempt at using cast aluminum fittings for a toy since they are fairly crude (by today's standards at least).

The copula opens to revel the massive motor. The key is screwed onto the motor before winding can actually begin. There is a break lever on the top of the motor, which keeps the rather heavy flywheel from spinning. The flywheel is so heavy, that it takes a few seconds for the clockwork to get it up so speed; it really sounds like an engine revving up! The motor itself powers a chain that goes from around the middle of the tank back to the rear drive wheels. It is really a fine, high quality piece of craftsmanship powering something as humble as a toy.

Vectis suspects that this was made by Bedington, Liddiatt & Co of London, but looking back at old English catalogs, they seem to primarily be a retailer, and not a manufacturer. I would love to know who made this little marvel, but I enjoy it none the less.