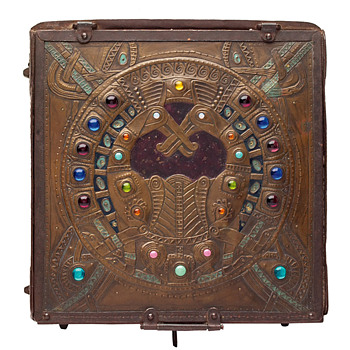 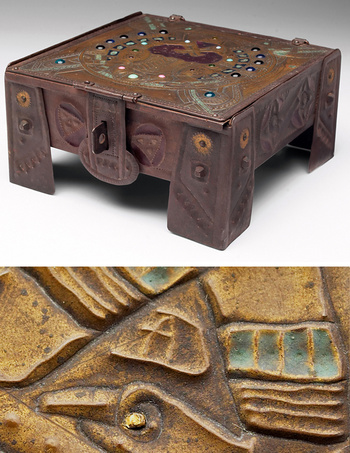 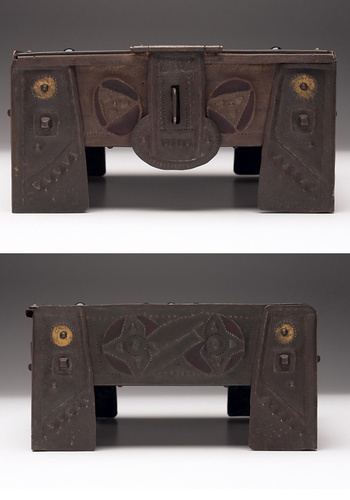 Rendered in a mix of Russian, Celtic and Egyptian designs, this striking desk box is one of three known examples with this interesting mixed motif. The reverse tapered feet of hand-worked cast iron elevate the box above the surface and allow for Daguet's tour-de-force repoussé work to command the attention it deserves. The decorative top has had numerous interpretations of the motif with the most frequent citing stylized birds, though I tend to think that the creatures in the roundel are jackals (maybe even of the Egyptian god, Anubis).

As is typical of Daguet's work from this period, the top is additionally inlaid with opals and multi-coloured glass cabochons and is strategically enameled in various places. Part of the fun in Daguet boxes is detecting the artist's name or mark, which all Daguet boxes have. In this example the artist's initials are located near the foot of one of the central bird/jackal figures. In addition, above the opposite foot is a numeral #2, indicating that this box is the second example in the series. A simple hasp with locking ring is located centrally on the front of the box; sadly, the original lock is missing, as is typical of most Daguet pieces. The interior is lined with patterned fabric from the period. Dimensions: 9”(W) x 4.5”(H).

A very close example of this Daguet desk box, but with different cabochon colors and less enamel work, was featured on the Antiques Roadshow (Denver, 3/29/2010). See here: http://www.pbs.org/wgbh/roadshow/archive/200904A53.html

Alfred-Louis-Achille Daguet (Paris, 1875 - 1942). Daguet's early years are shrouded in mystery and little is known other than he was a pupil of Jean-Leon Gerome and Charles Clairin. In 1900, Daguet appeared quite suddenly on the Parisian art scene when his intricate metal works were exhibited by Siegfried Bing in his famed boutique L'Art Nouveau. A sizeable number of Daguet's works from this period are labeled, "Metaux S. Bing" or "Brass S. Bing," as if there were actually a special department for working metal or copper in Bing's gallery, but the real work was being conducted by Daguet himself in a studio directly above L'Art Nouveau. At the Paris Salon of 1903 and 1904, Alfred Daguet exhibited seven objects which were done in repousse' copper. For this exhibition Daguet gave his address as 22 Rue de Provence.