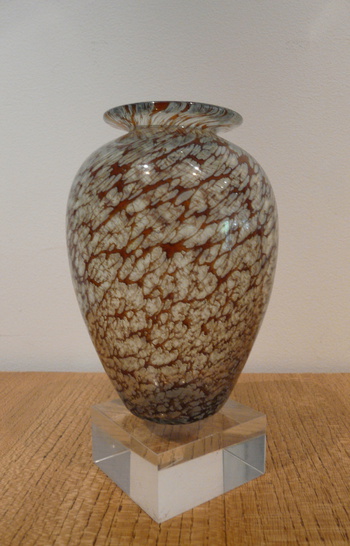 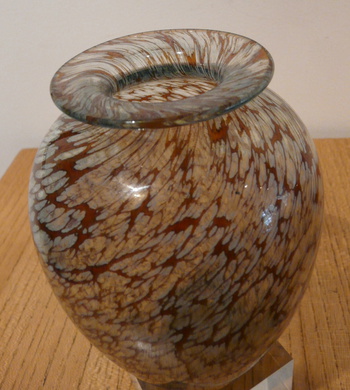 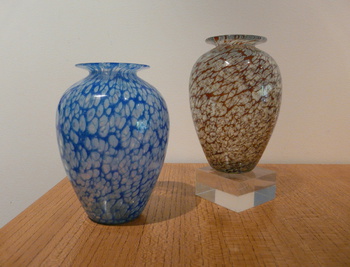 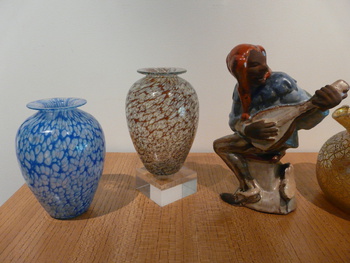 Two weeks ago I came back home along a regular route of op shops. I saw a familiar shape on the shelf and asked to "have a look at the little vase on the middle shelf, please?" It was a familiar, very familiar shape. I didn't need to find the signature. I knew what it was as soon as it was in my hands. I said that I would buy it and went searching in vain for another of them. You never know!!
I hopped on the bus and got the vase out to check for the signature. Very indistinct, but it was there. I need a loupe to find it. The grind on the pontil was the same too: rough, quite distinctive.
I had a pair of Nick Mount vases now, surely?
A harlequin pair!
When I got home it all fell into place.

I have been trying to find early pieces of Australian studio glass.
I especially like the form of this vase which is not huge at all.
It stands only 13 cm ( 5.1 ins ) tall and is 9.5 cm ( 3.75 ins )across at the widest point. When it comes to the artist who made it size can be very large. Some of his perfume bottles, amazing surreal objects can be constructs ten times larger!

I think this is his version of 'Schaumglas'.

Nick Mount (b.1952) was among the first to become involved in studio glass blowing in Australia the mid-1970s. Quite by chance as a student in 1974 he was chosen to assist Richard Marquis on a tour of Australia in Victoria & Tasmania demonstrating blown glass sponsored by the Crafts Board of Australia and Crown Corning. I think this was called "Blow Glass Down Under". He later studied in the USA and in Europe and set up his own studio in 1978 in Victoria called Budgeree Glass. In 1984 he moved to South Australia where he and his wife were making hand-blown production glass, working with both employees and trainees. In 1985 he returned to the USA as Teaching Assistant at the Pilchuck School with Richard Marquis and Therman Statom, Washington State, USA.

"By the late 1980s Mount saw himself mainly as a manufacturer and wholesaler of production glass, and relocated his expanded to workshop to Port Adelaide. In all these studios he offered traineeships to others. When the financial backer for this business failed in 1991, Mount ran the glass workshop at the JamFactory Craft and Design centre from 1994-1997, while also establishing a studio from home. He left the JamFactory to concentrate fully on making commissions and exhibition pieces, blowing the components in the JamFactory's facilities and designing and assembling the pieces at home. During this time, Nick Mount taught in workshops and summer schools in Australia and overseas, worked with other 'masters' in this field like Paul Marioni and Lino Tagliopietra, advised on workshop development, and was president of the national glass association Ausglass, in 1987/88. He has exhibited in a number of prestigious exhibitions in Australia and overseas and was awarded the Bavarian State prize in 1996. In 1999 he received a two-year Australia Council Visual Arts/Craft Board Fellowship grant, and was able to spend considerable time working with Marquis and others in the United States; teaching at the studio at the Corning Museum of Glass, Red Deer in Alberta, the Pilchuck Glass School, Seattle, and Kanazu, Japan; developing new work in Australia and preparing for a solo exhibition at Quadrivium gallery, Sydney and his first solo exhibition in the United States, in Seattle, in 2002."
http://www.powerhousemuseum.com/collection/database/?irn=348926 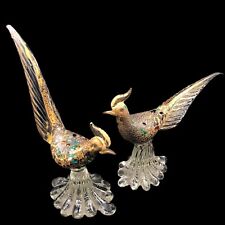 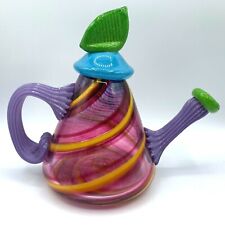