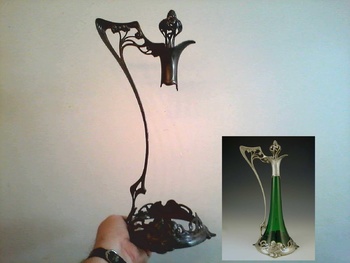 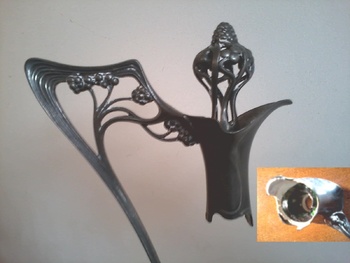 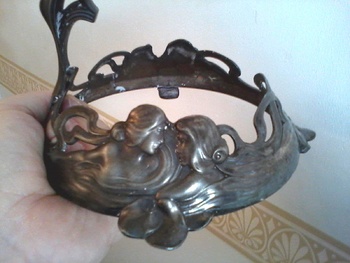 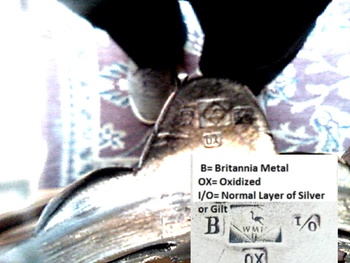 Well there's not much to say about this Salvation Army find but, My heart sank when I found out the maker of this beautiful mount with the missing green glass claret jug. The first thing I said was "OK who broke this !! I was assured it came in that way (a single tear,,,,,) by my friend. The maiden decor is really the epitome of "Art Nouveau". It's WMF of course which stands for Württembergische Metallwarenfabrik. WMF was originally called Metallwarenfabrik Straub & Schweizer and was opened as a metal repairing workshop. Through mergers and acquisitions, by 1900 they were the world's largest producer and exporter of household metalware, mainly in the Jugendstil, or Art Nouveau style, designed in the WMF Art Studio under Albert Mayer, sculptor and designer, who was director from 1884 to 1914. Had this been complete it would be worth over a thousand dollars or more from what I've seen online !! It is made of a type of pewter called "Britannia metal" or "Britanium". Favoured for its silvery appearance and smooth surface. The composition is approximately and typically 92% tin, 6% antimony, and 2% copper. The spout has traces of silver plate on it's interior though. The jug was a very simple and elegant trumpet shaped green glass liner. There are remains of glass in the neck of the spout. Someone had tried to polish it with silver creme so it's caked with the dried residue in every nook and cranny. There are four hallmarks on the bottom of one of the feet and screw tabs for holding and removing the glass insert for cleaning but only two remain. So it was made to be removed. Chances of finding an original green glass liner are probably slim, but I bet there's one out there somewhere. -Mike-