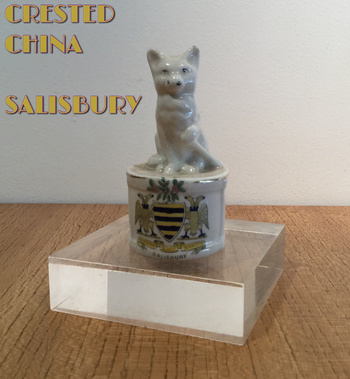 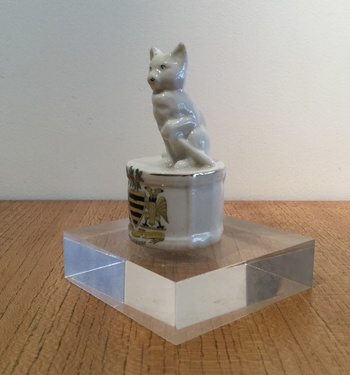 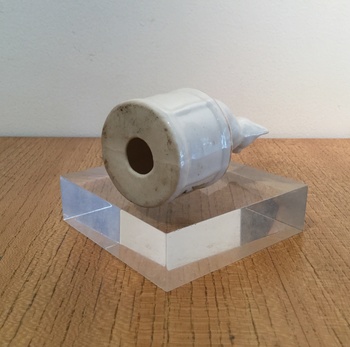 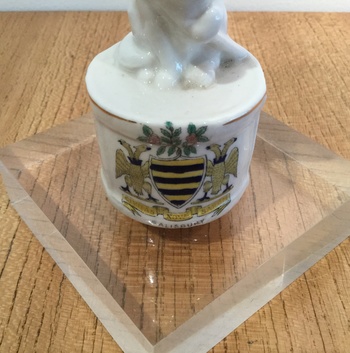 On Wednesday dropped my Mum off at a private hospital to have day surgery on her eyes. It meant I had to get lost for about three hours before picking her up .... three hours became four, but no surprise there. On the final stretch back to the hospital I trained into Summer Hill and a Vinnies where I came across some crested china in a box that had just been brought out by the young sales assistant.

Crested china has always interested me. Souvenir ware. Cheap. Porcelain. Heraldic crest of the area where it was bought. Latin mottoes. Interesting designs.

The box on the counter contained about forty pieces .... most of them were cats.

I bought about a dozen. I had first choice.

This one I need some help with.
Is it a dog on the drum or is it a cat? Perhaps it is a wolf ???
Does the animal have a paw around a drumstick or is it a yoga pose???

A pet waiting for his owner to return from war ???

The motto on the Heraldic crest of Salisbury is "CIVITAS NOVAE SARUM" - the city of New Salisbury.

"The arms of Salisbury are eight horizontal stripes across the shield, blue then yellow (or gold, on a monument), finishing with yellow at the bottom end of the shield. The 'supporters' - which can be any sort of animal, bird or human figure which can hold the shield upright - are, for Salisbury, two double-headed eagles, yellow (or gold), with blue duke's crowns around their necks. In some heraldic descriptions the eagles also have blue claws and beaks." (https://history.wiltshire.gov.uk/community/getfaq.php?id=270)

In this case there are some English roses above the crest as well.