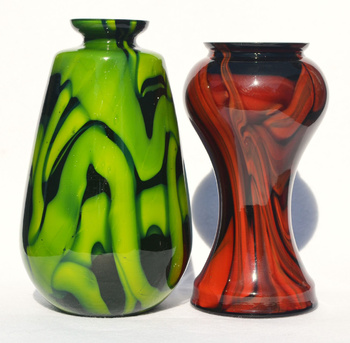 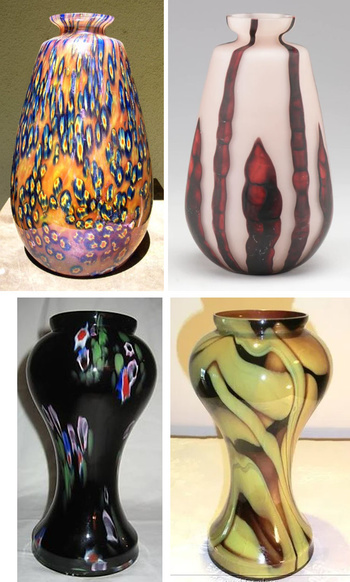 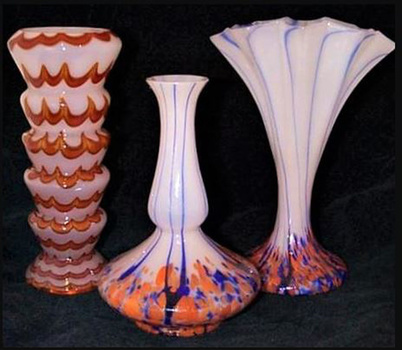 This webbed décor is often described as Kralik though, as far as I know, that is only speculation. Lately, Steinwald has been suggested. Could be - or could be another factory that has not yet even been considered. As was pointed out in an earlier discussion, we are not likely to get any definitive answers in most of our lifetimes.
The green vase stands 7½" (19 cm) tall; the red one is a little under 7" (17.5 cm) tall. These two shapes can be found with a rather quick internet search to décors represented as Kralik. (Apologies here - the group shot is of pictures lifted, uncredited, from the internet. If there are any objections, I will delete that image.) The shape of the green one is a little easier to find in different décors - the shape of the red one seems to only appear, aside from in different color webbing, in a millefiori décor long assumed to be Kralik.
Does this mean these vases are Kralik? In my mind, no. Nor does it mean that they are Steinwald or anybody else. But this is just an introductory beat around the bush to get to the third picture (again, an unauthorized internet lift) which shows a "Wave" pattern décor on a "Zig Zag" shape. Neither this "Wave" nor the "Webbed" décors or the shapes I've shown are particularly complicated and could easily have been made in similar variations by more than one glass house but that "Zig Zag" shape was probably copied less frequently.