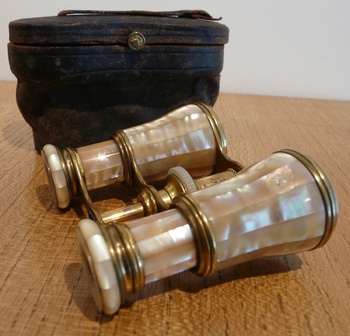 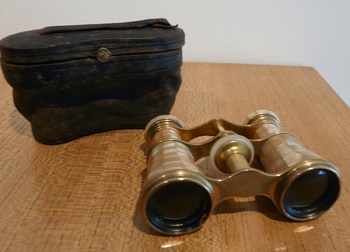 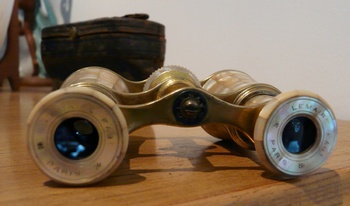 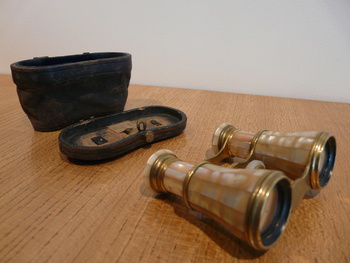 For some strange reason I had wanted a pair of these opera glasses since I was a kid. I find these optical things fascinating. The movement, the lenses, the iridescence of the mother of pearl, ...... all have an attraction. I found this pair in the case with the bee opening clip at the Salvos.
They are marked Lemaire Paris. Most references put them to the early 1900's.
But binoculars are always handy!
I'm a visual learner!
LOL!
I've been researching the Lemaire firm and have found out that the firm was begun in 1846 in Paris, rue Oberkampf. 22 & 26 by Armand Lemaire. They produced a variety of optical apparatus including binoculars. The French term for binoculars is 'jumelles' or twin girls. The Lemaire firm worked until 1955. Lemaire exported his goods all over the world.
Armand Lemaire died in 1885 and his son in law Jean Baptiste Baille took over the running of the firm now called the Baille Lemaire group.
As an aspiring entrepreneur Baille set up a factory in the Essonne at Crosne. But the endeavour was a little bit more adventurous than making optical instruments. They got involved in the car industry between 1886 and 1903 ! They built a car with an air cooled two cylinder motor that could deliver eight horse power called the Model 8CV. And it seems they set up a model factory with benefits for the workers there including banks and even a model town to house the workers called la cité Baille-Lemaire. One of their cars took part in the Paris-Amsterdam-Paris race of 1898.
I've not been able to find a photo on the net of one of these cars.
It seems they are a rarity, unlike the 'jumelles' that the company produced. The group were also involved in the production of medals, coins and tokens and are well known in numismatics too!
The Baille-Lemaire group later got involved in trains and did work for big French industrial names: the EDF (electricity), the SNCF (French rail network), the RATP (Paris public transport)and the French Army.