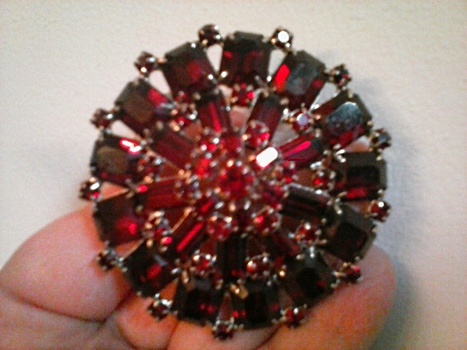 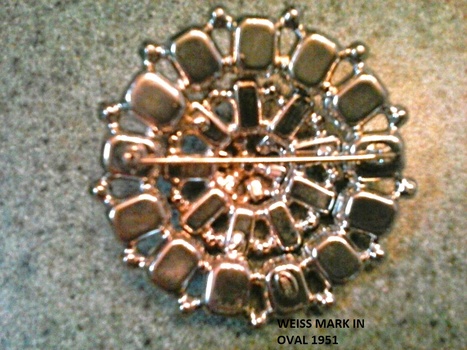 I've never bought any jewelry at Savers because I think it's all over priced, but when I saw this my jaw dropped ! A huge dazzling 2.75" diameter ruby red rhinestone brooch. The back is as nice as the front and rhodium plated. I had to have it but there was no one in sight at the counter and another gentleman was hovering. So I went to the one open checkout to get help and we both got there at the same time. He asked the cashier to get someone and I said I needed help as well. When the girl arrived I was polite and told her the other person was first. I thought he wanted the brooch. Instead he asked to see a radio behind the counter. I asked to see the brooch so I could check for a mark and then I see the "Weiss" logo on the back. I honestly would have bought it marked or not although I was fairly sure it was a Weiss piece just because of the quality.Then the other guy comes over and says "I was going to buy that but I'm feeling cheap today " Well it's not like I didn't give him the chance. It was more than I usually spend but I think it's worth a whole lot more and it's beyond gorgeous. Now if only those were real rubies. -Mike-

Weiss Jewelry, founded by Albert Weiss, was not as big a company as some of the other jewelry retailers, but like them, Weiss Jewelry *sold different lines for different pocket-books.
They sold some very high end beautiful jewelry and accessories, paying great attention to detail.
Albert Weiss, a native New Yorker, started his company in 1942, on Fifth Avenue in N.Y., after having worked for Coro and Marvella Jewelry.
Mr. Weiss worked primarily in clear and colored rhinestones and was very well known for his creations of butterflies, bugs and flowers.
The first mark used was "WEISS" in block letters, then "Weiss" in script. Also "Albert Weiss" and A W Co.
This last mark was started sometime in 1951.
You can put you cursor over the marks at the left to see more.
Albert Weiss was president of his company and retired in 1969.
One of Albert's sons, Michael, continued the business for a short time but finally Weiss Jewelry closed it's doors in 1971.
Weiss jewelry, compared to other companies of the times, was in business for a relatively short period of time. This means there is less Weiss jewelry to collect and it is a little harder to find.
Albert Weiss has left us some wonderful collectible treasures!

*It is a common misconception that these various jewelry companies, like Weiss, made their jewelry; not always true: Some did, some didn't. Like the clothing industry, most retail jewelry companies shopped at the various manufacturer's showrooms, picked out their lines for the seasons, and had their own paper labels/hang tags or imprinted stamped marks put on the jewelry they wished to sell under their brand name.
These jewelry companies would also often have their own in-house designers and have the manufacturers make up their designer’s creations.
Hang tags, brand marked boxes, or attached paper tags were often tossed out or lost when jewelry was purchased, leaving many of us wondering about those unmarked pieces of jewelry: To whom should we attribute them? That's a whole other discussion.