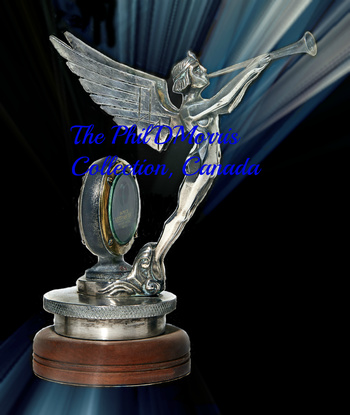 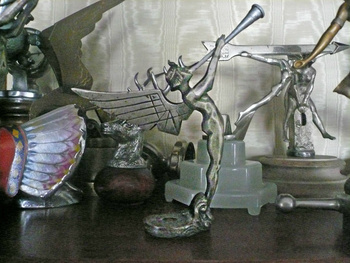 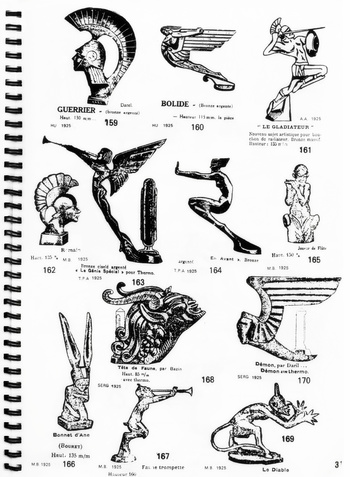 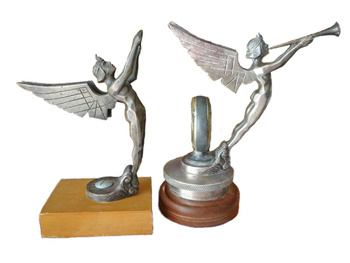 Aida Figure, Le Genie Special By Fadi Cajani, French Car Mascot, Paris Circa 1925
This figure was previously in the collection of PASQUALE GIORDANO Italian mascot collector, whose estate sold his famous collection of nearly 1000 mascots, an unheard of quantity of the most famous french mascots. The sale was originally for around 600 mascots but by the time the sale catalog was produced it was for nearly 1000. Some of the over 800 lots had up to 3 mascot items in them. Giordano was a lawyer in Rome and owned one of the largest collections of mascots. Passionate about art and cars, he assembled an exceptional collection of over a period of more than 30 years. The sale was part of Retromobile of Paris, 2016.

I love the period 1925 mascot which has much of the silvering of the bronze intact.

From the last image to this one, this is what the Egyptian girl is holding. A trumpet. Whereas the last mascot there is no room for a motometer because she is mounted so much higher to the base, with the wings sloping downward, the difference which really shows in the second photo with the two mascots in comparison.

I had found this third image on the page of a mascot catalog identifying it with the same figure by Fadi Cajani. The figure only seems missing the Egyptian crown in the catalog.

Thank you kyratango for making me a wood trumpet for the old figure of last post. It is now mounted to the old figure. Kyra you are a gem. Someday in the future I hope to obtain a metal flute. I had seen one on a 10k brooch on ebay but too expensive at way over 250.

Thanks to Manikin also for all her help in preparing the forms I needed to get to obtain this and other mascots from this sale. Mani you are a gem also, always willing to lend a hand. And to Kyra, I have added the last photo which shows your skill at trumpet building, Thank You !~