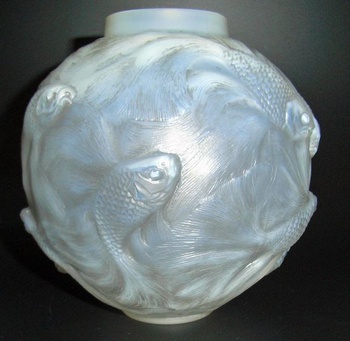 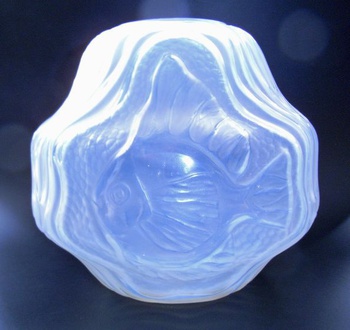 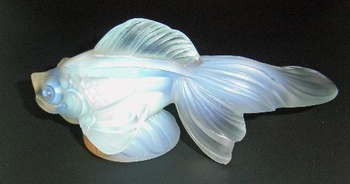 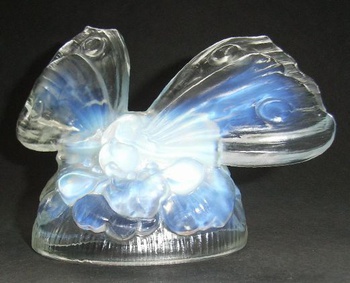 First, thanks to everyone, here and on facebook, for all the enthusiastic responses, and love, I’ve had for ‘Unsung Heroes 1-5’. I thought for No 6 I’d go even more left field.

Now some of you may think I’ve gone mad; the pictures of opal glass, above, do indeed cover:

What could they have in common? OK - other than all representing, living things, mostly fish. Well they all are very sculptural and, although designed by very different people, the moulds made to produce them were all, almost certainly, sculpted by Etienne Franckhauser.

French glass in the early 1930 had finally evolved away from the 1900 look. For most people, even the late 1920s had still been about a ‘New Nouveau’ as the new ‘Deco’ style was a bit too avant garde for most people. Finally in the early 1930s modernist- ‘Art Deco’ reached a more mass market appeal. In glass making, to achieve the new look, stylish and effective use of technology slowly became more significant than the classic skills of the artisan glass blowers. Initially this was less about making cheaper glass and more about being able to produce sculptural, colourful glass. So in a way the glass blower’s skills were replaced by the mould maker’s; a very different skill, but not to be underestimated in terms of its impact on the middle and high end glass marketplace. Sadly, a little later, the ‘artist mould makers’ like Etienne, were replaced by the ‘cheap mass market mould makers’ and it was possible to make similar, lesser quality, glass much, much, cheaper.

Very little is known about Etienne, except that he was probably France’s foremost metal mould maker for glass manufacture. The french records are very sketchy; all we really know is that he was very active in the 1930s. He probably worked from design drawings or occasionally maquettes (plaster models) and made 2, 3 or 4 part metal moulds –being very fine these probably only lasted a matter of months before they needed replacing.

Lucky in the records of Jobling (a British glass company) there are some very useful titbits. They relate that Jobling wanted to emulate the Lalique-look and sent a research group to France to try to get a licence to be able to make some of the ‘oh so popular’ French art deco glass in the UK. Lalique quickly sent them packing, Sabino was more willing, but asked for far too much money, and so they were stuck. Fortunately they were not only researching design, they also surveyed production; so noticing almost everyone hired Mr Franckhauser they went to see him. They told him ‘we love your moulds, if only we could find someone to design for us’. Etienne said ‘OK I’ll do that for you too!’ He went on to design for them for quite a few years.

Etienne clearly really understood opalescent glass and how to make it look best. When cooled correctly, the bluey-white opalescence forms in the glass, where it is thickest, whilst the thinner parts stay clear. The effect looks best where a piece has a strong mix of both thick and thin moulding.

He also clearly understood the properties of the ‘demi-crystal’ glass that these designers used in production. He knew how much detail it could take and what it couldn’t do. (When Marc Lalique converted Maison Lalique to the newly fashionable ‘full Crystal’, many of the existing moulds designed for demi-crystal had to be abandoned, as the more viscous ‘full crystal’ would not take to the detailed shapes).

Of Etienne’s work I’ve shown here mostly fish, an Art Deco classic image, but he did a wide range of other moulds; whatever the designers could conceive. (Incidentally the Sabino fish, was a step too far, its mould proved so complex to use, it was quickly abandoned.)

I can’t even be 100% sure Etienne worked on any of the pieces above –alas almost no-one recorded the mould makers for their pieces; but very probably he made the moulds for all these pieces. We do know that Etienne make most of the moulds for all the makers represented above and for many more people too. In the case of the Jobling butterfly (far right) he probably designed it himself. 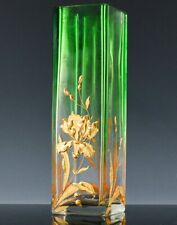 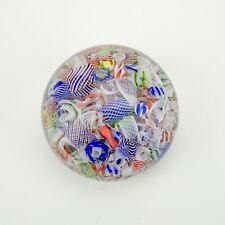 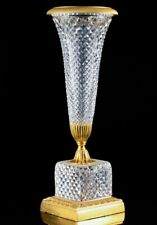