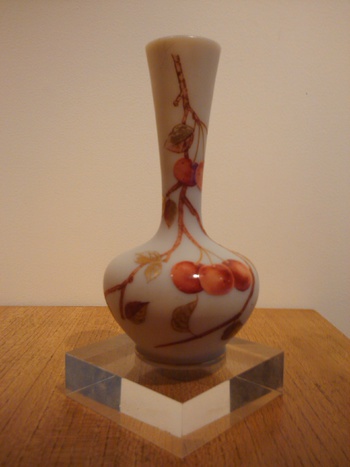 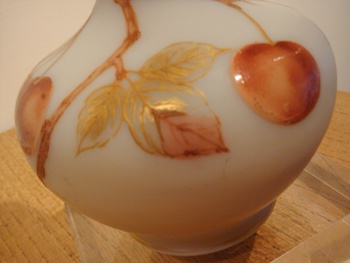 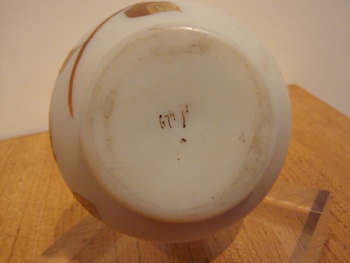 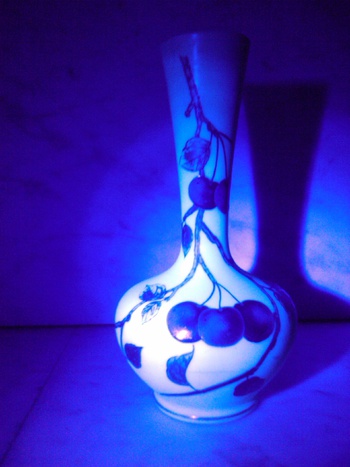 On other occasions I have noted how it can pay to vary your routine and your routes when out on the hunt for treasure. This week I got a phone call from my 90 year old mother to say that she was in hospital after a fall at home. I wanted to visit her and knew that it would mean a variation to my routine on Tuesday mornings. Mum was OK, bruised, tired but settled when I left her and headed off on the bus trip that would take me two hours to get home.

I stopped off at three stores and had found nothing. Would I get off the bus for a last look before home? Why not!

The Vinnies store had this little vase in a cabinet that immediately took my eye. The price was right too! Not cheap, but certainly not expensive. But it was the enamel work that took my eye. Those cherries were so well painted!

The custard glass has a very slight green glow to it in sunlight. I did not have my black light with me but I knew it would glow! The matt texture of this glass provides a great surface for enamel and gilded decoration. Most of the gild remains on the Uranium cream/green. I showed it to Trudy V. and she referred me to some of Alisa P's fruit pieces. Thank you ladies for your help!

I saw that on these fruit pieces the numbers began with a 6. When I first saw the numbers on my vase I was not sure if it read G74 or 674. I now think that they read 674. Alisa P. has told me that this is a decor/production number. There are some other marks on the bottom of the nicely ground foot but there is no Harrach feather/propeller mark ... or is that the remnants of it under the numbers?