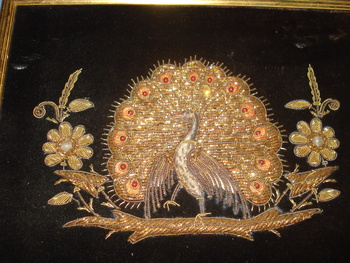 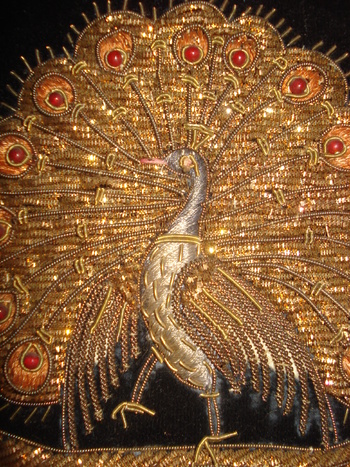 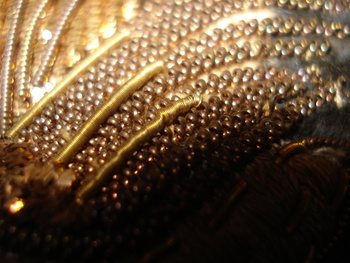 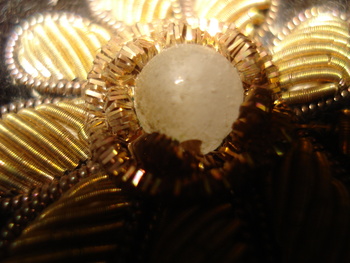 A few days ago I bought this wonderful embroidery for 3 dollars to Dorita Ferrari.. The black velvet was clearly no old and It seems synthetic. The detail are magnificent, the beads are of glass, see the last two pictures, the little ones that forms the flight feathers. Searching the web I found something similar two evening bags Pretty Vintage Velvet Purse, Metallic Bullion Peacock Zardozi Embroidered, 1920 – 30 http://divineantiques.com/pur2g.html; so I understood this one is a Zardozy embroidery, most probably from India.
https://www.desiroyale.com/blogs/news/36505345-the-fascinating-heritage-of-zardozi-embroidery
Zardozi is a form of an embroidery that came to India from Persia. It is said that has been in existence in India from the time of the Rig Veda. Zardozi is a Persian word that means sewing with gold string. Zar meaning gold and Dozi meaning embroidery. Zardozi also known as Zardosi and Zardouzi, is a form of fabric embroidery which was popularized in India by Mughal emperors. During Mughal era it gained more popularity and brought richness when used on Indian textiles and fabrics. The Ari work or Zardosi work a type of hand embroidery popular in Iran, India, Pakistan and Bangladesh. Zardozi embroidery is beautiful metal embroidery, which once used to embellish the attire of the Kings and the royals in India.
The earliest of the mentions of this style of embroidery (not typically Zardozi) can be seen in Vedic literature. Then it was known as “Kalabatun” which used silk threads wrapped in real gold and silver wires to decorate satin and velvet fabrics. Today, it is popular in the Indian cities of Lucknow, Farrukhabad, Chennai and Bhopal. Lucknow became a central hub for this embroidery technique during Aurangzeb’s reign in the 12th Century, when this imperial art form was encouraged under ruling Mughal beneficiaries.
http://www.indiamarks.com/what-is-zardozi-work/
First Commercial Production
The first commercial scale production of a manufactured fiber was achieved by French chemist Count Hilaire de Chardonnet. In 1889, his fabrics of “artificial silk” caused a sensation at the Paris Exhibition. Two years later he built the first commercial rayon plant at Besancon, France, and secured his fame as the “father of the rayon industry.”

Several attempts to produce “artificial silk” in the United States were made during the early 1900's but none were commercially successful until the American Viscose Company, formed by Samuel Courtaulds and Co., Ltd., began production its production of rayon in 1910.

In 1893, Arthur D. Little of Boston, invented yet another cellulosic product — acetate — and developed it as a film. By 1910, Camille and Henry Dreyfus were making acetate motion picture film and toilet articles in Basel, Switzerland. During World War I, they built a plant in England to produce cellulose acetate dope for airplane wings and other commercial products. Upon entering the War, the United States government invited the Dreyfus brothers to build a plant in Maryland to make the product for American warplanes. The first commercial textile uses for acetate in fiber form were developed by the Celanese Company in 1924.

In the meantime, U.S. rayon production was growing to meet increasing demand. By the mid-1920's, textile manufacturers could purchase the fiber for half the price of raw silk.

So began manufactured fibers' gradual conquest of the American fiber market. This modest start in the 1920's grew to nearly 70% of the national market for fiber by the last decade of the century.