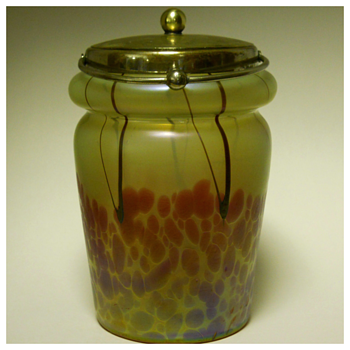 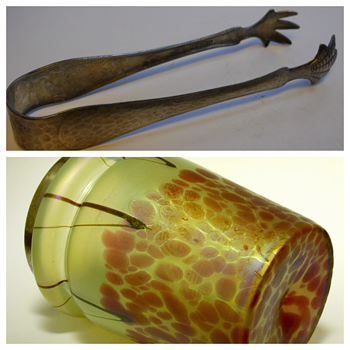 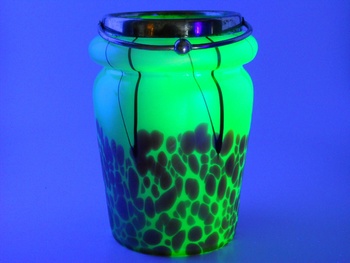 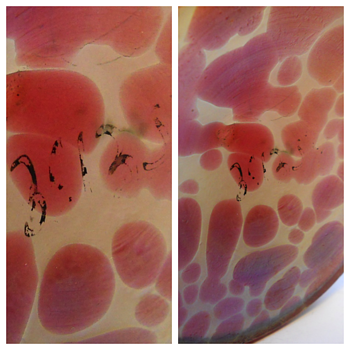 Hello Followers, Visitors, Members and Friends from Collectors Weekly, 3-03-2017, 12:30 AM
When i see this piece online, I was attracted to it, because I am very much addicted to Cookie Jar/Ice Bucket/Humidor.
My collection keep growing, and this new addition just reinforce my ADDICTION, LOL
Many reason make me go full throttle to get it, first I was suspicious on the possible UV reactive of the glass, even if there not described as it was, I was confident and it pay off(picture 3).
This Ice Bucket has internal cranberry inclusions done in the oil spot technique, on a pale celadon green iridescent ground, in addition when i do a close inspection I discover some part number mark at the base(picture 4)
3?1?3?3, this piece coming with some claw plier to take ice cube from the bucket.

MANY THANKS TO IVONNE AND MARTY FOR THERE EXPERTISE AND OPINION, TO ID THIS ICE BUCKET AS PALMEE KONING, DEEPLY APPRECIATED.

Uranium glass is glass which has had uranium, usually in oxide diuranate form, added to a glass mix before melting for coloration. The proportion usually varies from trace levels to about 2% by weight uranium, although some 20th-century pieces were made with up to 25% uranium.

Uranium glass was once made into tableware and household items, but fell out of widespread use when the availability of uranium to most industries was sharply curtailed during the Cold War in the 1940s to 1990s. Most such objects are now considered antiques or retro-era collectibles, although there has been a minor revival in art glassware. Otherwise, modern uranium glass is now mainly limited to small objects like beads or marbles as scientific or decorative novelties.

Vaseline glass is now used as a synonym for any uranium glass, especially in the United States, but this usage is not universal. The term is sometimes carelessly applied to other types of glass based on certain aspects of their superficial appearance in normal light, regardless of actual uranium content which requires a blacklight test to verify the characteristic green fluorescence.

Uranium glass became popular in the mid-19th century, with its period of greatest popularity being from the 1880s to the 1920s.

The first major producer of items made of uranium glass is commonly recognized as Austrian Franz Xaver Riedel, who named the yellow (German: Gelb) and yellow-green (German: Gelb-Grün) varieties of the glass "annagelb" and "annagrün", respectively, in honor of his daughter Anna Maria. Riedel was a prolific blower of uranium glass in Unter-Polaun (today Dolni Polubny), Bohemia from 1830 to 1848.

By the 1840s, many other European glassworks began to produce uranium glass items and developed new varieties of uranium glass. The Baccarat glassworks in France created an opaque green uranium glass which they named chrysoprase from its similarity to that green form of chalcedony.

At the end of the 19th century, glassmakers discovered that uranium glass with certain mineral additions could be tempered at high temperatures, inducing varying degrees of micro-crystallization. This produced a range of increasingly opaque glasses from the traditional transparent yellow or yellow-green to an opaque white. During the Depression years, more iron oxide was added to the mixture to match popular preferences for a greener glass.This material, technically a glass-ceramic, acquired the name "vaseline glass" because of its supposedly similar appearance to petroleum jelly. Today, a few manufacturers continue the vaseline glass tradition: Fenton Glass, Mosser Glass, Gibson Glass and Jack Loranger.

US production of uranium glasses ceased in the middle years of World War II because of the US government's confiscation of uranium supplies, and did not resume until 1958.