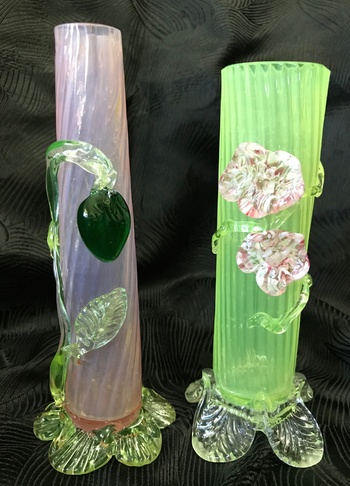 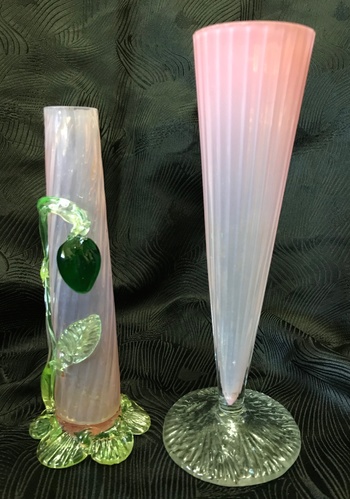 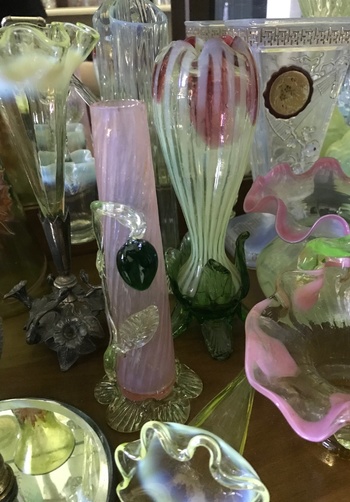 Following up to my recent post of an unusual Victorian tube vase with applied decoration, I've taken a couple of photos of it with some other vases which share certain aspects in common.
1. With a yellow - green vaseline glass tube vase with applied flowers that I've owned for many years. There are some similarities in the slightly swirled vertical ribbed pattern, as well as the applied feet (though this type of stylised leaf foot turns up on many examples of Victorian art glass, & was most likely used by numerous manufacturers of the era.) The vaseline tube vase is perfectly cylindrical, whereas the pink one narrows towards the top.
2. With a pale, translucent "spreading pink" vase of conical form, with vertical ribbing. Even though there is an abundance of pink glass from the Victorian era, this is one of the rarer shades. The tube vase does not have the "spreading" gradation, but a similar soft, warm tone of pink is in evidence.
Sadly, I am as yet unable to ascribe a manufacturer to any of these items, but I thought it worthwhile to put some images out there simply for interest's sake.
3. This shows the new acquisition happily settling in with other Victorian art glass in pink, vaseline, & opalescent tones.