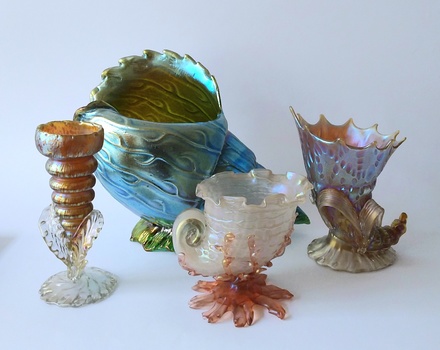 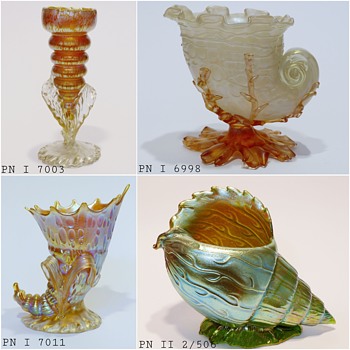 I fell in love with these shapes many years ago when I saw a large number of such very large vessels at once in an antique shop in London. Unfortunately, I was unable to purchase a piece of it. On my second visit, none of these pieces were left, they were all sold ... the collector's bad luck.
Since the term mussel appears again and again with these vessels, I would like to point out that most of the Lötz vessels in the form of shellfish are not mussels. Often they are sea snails, some from the triton family. Unfortunately, the term shell was also used in the Lötz cutting index and in the Lötzbuch (Ricke). So it will probably stay with this incorrect designation. But there are also Loetz vessels in the shape of a shell (e.g. PN I 7855), these are less common.
The first verifiable cuts of these vessels date from 1897, from PN I 6996, they mark a transition from historicism to art nouveau. These zoomorphic shapes were very popular and a sought-after fashion item. They were made in many different decors and sizes in a high quality, with and without decorative overlays such as coral branches, leaves and pearls (see version 132). A large part of the early production was done for Bakalowits in Vienna, the production of the second phase (PN II 2/491 to PN II 2/521) for Max Emanuel & Co. in London and partly also for Neurath & Klein in Vienna. Most of the pieces for Max Emanuel were executed in "pink silver craquele". In the first phase from 1897 the decors were: "Diaspora silver iris", "Papillon", "Chine", "Formosa", "Crystal light iris", "Zephir" and "busted Chine". In the second phase in 1902: "Oceanic", "Terresta" (a decor that has not yet been identified), "Creta Gre 1/473", "Neptun", "Formosa", "Creta Gre. 2/19" and probably in both phases also other decors. In 1905, snail and shell shapes were added to the range again; 22 patterns have been preserved here. These were made exclusively in "Candia wave optics with silver leaves" for Max Emanuel & Co. in London. In 1907 Eduard Prochaska designed snail and shell-shaped vases with basket-like braided feet (PN II 4790 to PN II 4800). These were mostly made in "green metallic with silver feet" but also in candia, imperial red, mandarin, camelia red, sky blue etc., they were also made for Max Emanuel. In 1908 the old forms (from PN II 6206 to PN II 6226) from the first phase were reissued, this time with corals and pearls, so in execution 132. Later pieces are not known to me.The Lötz company has certainly also marketed such products on its own.
Here you can see: PN I 6998, zephir chine with pink - PN I 7003, candia Papillon, inside silver - PN I 7011, candia Diaspora silver iris (1902) - PN II 2/506, Neptun creta.