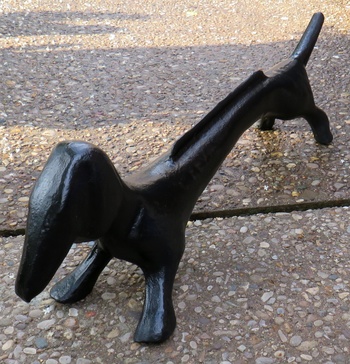 Hello everyone!!
Another of my many cast iron boot scrapers. This Dachshund has a very primitive appearance and is much different than the boot scrapers we typically see. It has an arched back and a straight tail, instead of the ring tail that we usually see on Dachshund boot scrapers. This one is also a solid one piece design, instead of a two piece. In researching the age of this one, I've seen reports of this design being anywhere from the late 1800's to 1930's. So, I'm still not truly sure of it's age. Let's just say the early 1900's. It's the longest and heaviest of my boot scrapers and measures 24 1/4" long, 7 1/2" tall and 5 1/2" at the widest point. It weighs well over 30lbs. The scraper has been worn down from years of use and exposure to the elements. But, other than that, it's still in pretty good condition. It came to me very rusted, so I cleaned it thoroughly and repainted it.

Thanks very much for stopping by for a look!!
Scott