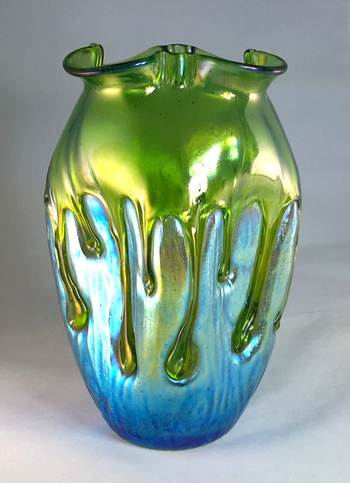 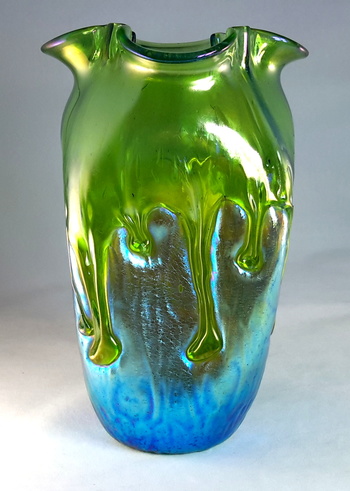 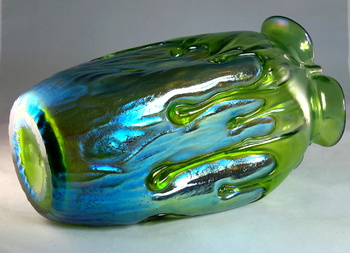 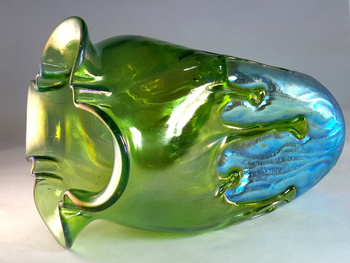 This is a vase for which I have very strong feelings. Some who know me also know that I have been trying to obtain a good example of the decor, meaning good condition and interesting form, and this has both. Without going into detail, I have had close ones that fell through my fingers for whatever reason, but perhaps that reason is that I was meant to have this one.

7 5/8" tall, great iridescence both on the green drips portion and the underlying blue silberiris Rusticana portion. Polished pontil/fire-polished rim, the Production Number appears in Series II by Jitka Llenickova, as well as in Ricke band 2. Series II, PN 519 from 1900, and Creta mit Behängen is a listed decor for this number.

As I have commented to some, this is the "cherry on top" of my collection, my "white whale" of sorts. It is a rather simple decor, green, uninteresting to some. It is actually not all that rare, but what is rare is having someone part with one. Collectors with sizable Loetz collections who want one, have one, but they seldom let go of them. When I began collecting about 15 years ago, they were more common on eBay, but at the time even the $300 they normally brought was outside the reach of a new collector, and later when the means and desire were there, the vases were not.