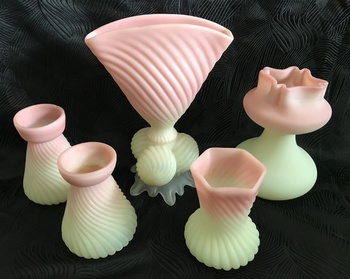 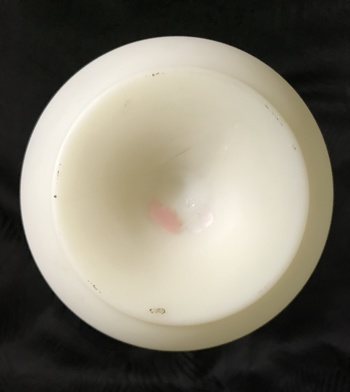 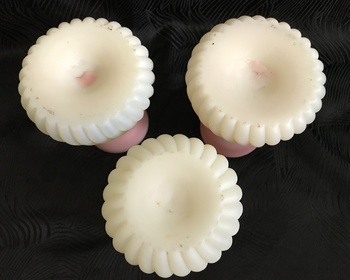 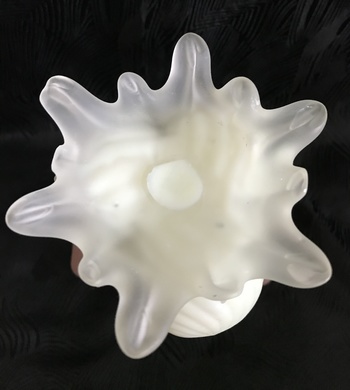 Nothing new here, but I'm reposting these Victorian era vases in a group shot in the wake of welzebub's recent post of a Welz M - crimp vase.
All are made from "Burmese" type glass, which contains uranium & glows under UV light.
Burmese was first made by Mount Washington in the USA, & then produced by Thomas Webb & Sons in England. It was a high end glass, made using expensive ingredients - uranium for the custard - yellow, & gold for the pink (it "strikes" on reheating).
The Mount Washington & Webb products have distictive & well - documented shapes.
So when I found the first of these mystery pieces, I was puzzled, as it didn't fit in with what I knew about Victorian Burmese production.
That first example was the small vase with the hexagonal top, which measures 11 cm tall.
Several years later, I found a pair of small vases with cupped tops, 10.5 cm tall, with the same swirled ribbing.
When I saw the fan vase (26 cm tall) with the unique, three - ball base, it was a revelation - it seemed that Welz made their own version of Burmese glass.
Then, I acquired the M - crimp vase last year (21.5 cm tall) & things became even more interesting, as M - crimps were made by a couple of makers, including Welz.
I've included some images of the bases to show their pontil marks.
The M - crimp vase has a rough one with a touch of pink, showing that the heat "struck" a little of it.
Same roughness & pink touches can be seen in the pair of swirl ribbed vases, however, the pontil on the hexgonal top vase has been polished out.
The three - ball vase also has an applied clear base (satin finished like the rest of the vase). It has a "plug" of custard coloured glass set into the clear.
I'm intrigued to think that there could very well be other examples of what I shall call "Welzian Burmese" out there to be found...