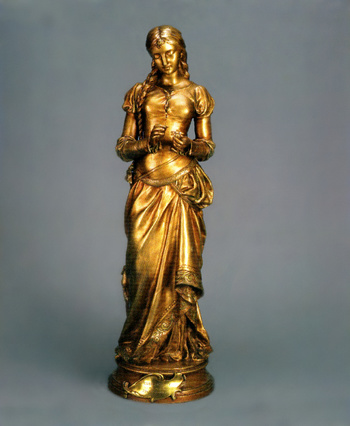 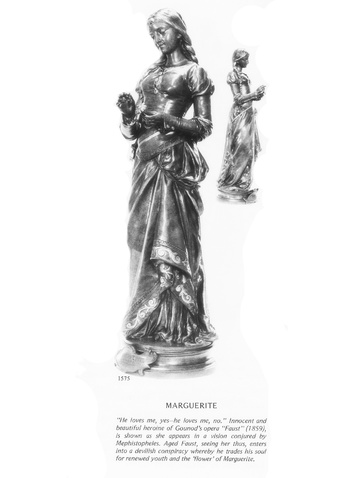 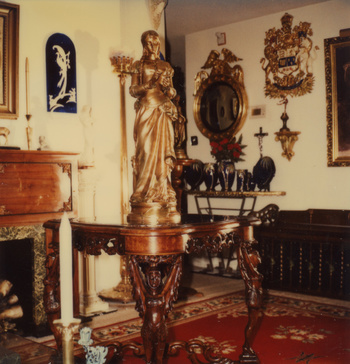 Marguerite, By Adrien - Etienne Gaudez, 1845-1902, Founder F. Barbidienne, Circa 1870, Hors-Concours
Height is 85 cm., the largest of this sculpture.
Patina: Golden brown with gold and greenish highlights

I obtained this beautiful piece in 1989 and was my first large bronze statue. The founder is the esteemed Ferdinand Barbidienne who is highly in demand these days for collectors of Bronzes. Gaudez used this founder more than any other for his larger pieces. The size is larger than the average of 24 inches. Adrien-Etienne Gaudez obtained the high status of hors-concours in his short lifetime which is saying that he could show his work out of competition, not having to compete with others !~
Gaudez was acclaimed for his superior work carefully sculpting the eyes of his subjects, especially when the subject is looking down.

The 3rd photo is of my second living room kitchen which was built in and much the same except I have my father/mothers items which I do not want to give up just yet. Very few people get to see the room unless I have to show them something on the computer.

I hope to add a 4th photo of another statue I had of Margaurite apart from the group statue of Maguerite and Faust together which I bought in 1985. She is wearing a striking wimple in that one.

... Aged Faust, seeing her thus, enters into a devilish conspiracy whereby he trades his soul for nenewed youth and the "flower" of Margurite.