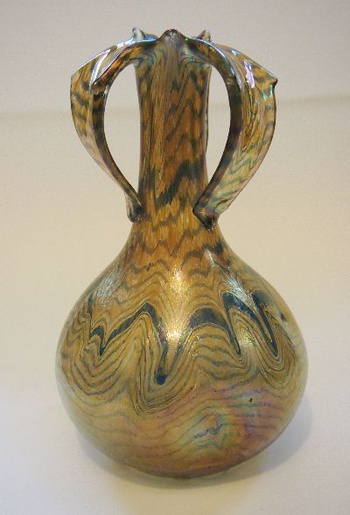 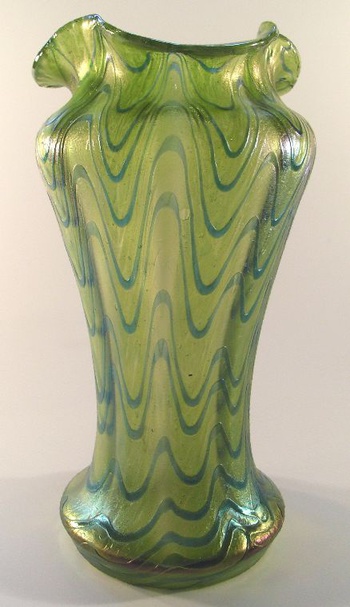 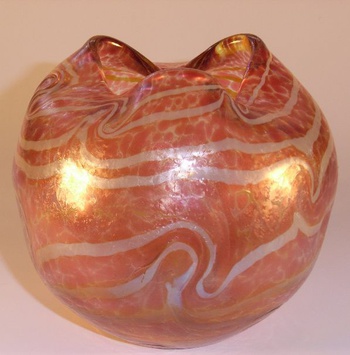 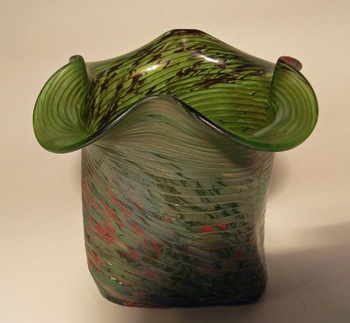 I’ve called Otto Thamm –‘the man who was nearly never known’, because if it was not for the recent serendipitous discovery of a design book in an old archive, of a different glassworks, probably no one would know much about Otto and his amazing creations.

The only published book on Otto Thamm and his role at Fritz Heckert is by Stefania Zelasko and it is in German, a language I don’t speak! It came out last year and contains extensive examples and associated design drawings that seem to conclusively prove Otto Thamm designed, and Fritz Heckert produced, some of the best Art Nouveau glass ever made.

The drawings seem to have been found in a Josephine archive, but then this makes sense as they merged with Fritz Heckert around in the early 1920s. Also, somewhat contentiously, it means all these pieces are German or rather German Silesian not Bohemian.

Otto Ernst Traugott Thamm was born in 1860, married into the Heckert family in 1891, soon became their Managing Director, but alas died around 1905. His first significant designs start appearing in the mid 1890s, mostly, at this stage, continuing Heckert’s tradition of fine enamelling on other peoples’ blanks. Somewhere at this time Fritz Heckert acquired the capability to make their own glass, and Otto started designing the most amazing high Art Nouveau or more correctly Jugendstil art glass. Some would say they even outclass Loetz, but I’ll stick to just saying he designed and produced some of the greatest glass of the period.

These pieces all require an amazing high level of hot work skill, the people who made them must have had many years experience in making such complex shapes and finishes. This suggests, to me, that if Fritz Heckert only set up its glassworks in the late 1890s and given they were producing work like this by 1900 (the date of many of the designs) then they had to have brought in, from other important glassworks, many master craftsmen. I do wonder who they were and where they had worked before.

The pictures show only a small cross section of his designs; I’ve picked what I view as some of the best and ones that have confounded the experts, in terms of origin, for years.

Picture 1: Otto Thamm 1901 a amazing example or fine iridisation and hot scissor cutting, complex work that would have to have been completed in seconds or the folded back ‘ears’ would have caused cracks. An identical example is on the cover of the Fritz Heckert Book.

Picture 4: Otto Thamm (finish c1902 shape a little earlier), Possibly the only Fritz Heckert shape that can be found in both enamel examples and a number of different iridised versions, I’ve always referred to this particular finish, possibly wrongly, as ‘modified snake skin’.

Otto only survived for 5 years of this new style production, dying at young age of 45. Just think what he could have achieved with a few more years.

I should note that I’ve done my best here to show pieces that are close, or identical, to pieces in the Otto Thamm design books and items featured in the new Fritz Heckert section of the wonderful Passau Museum. As they are never signed, there is the slightest possibility that they are indistinguishable copies, made by other glass house at the time, but I seriously doubt it. However I must add there are just a few items at Passau and in the book, attributed to Otto Thamm and Fritz Heckert, where I will say I’m not yet 100% convinced of their new attribution.

There will be a pause in the series now for a week or so –any suggestions as to who next? (No promises.)