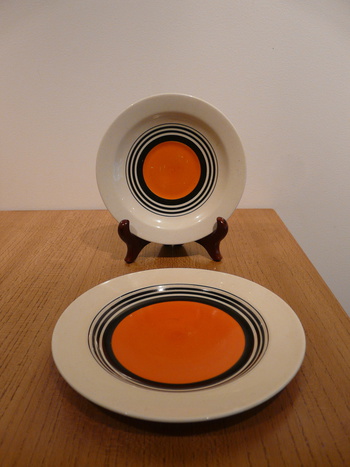 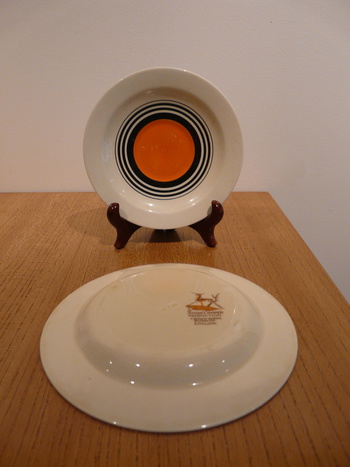 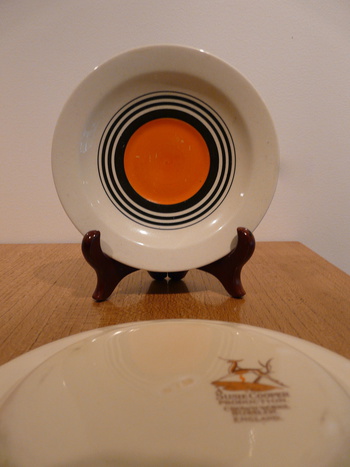 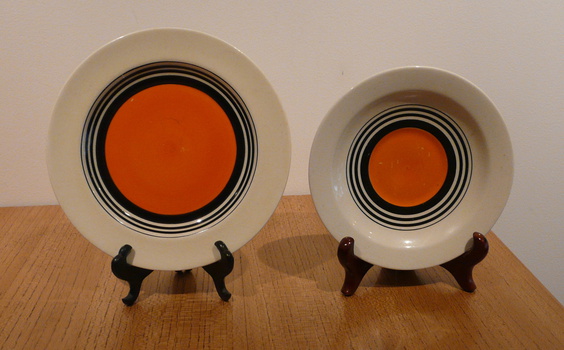 A Salvo's purchase a few months ago that I could not resist. It should be a 'trio' but the cup was nowhere to be seen. I hunted around the shelves for the possible cup shapes. I knew the pattern and what they would look like. I'd seen the trio used in so many thirties TV shows. I think that they are Graduating Black Bands pieces linked to the pattern called 'Kestrel'.
Many thanks Phil!
The cup itself might be a curved teacup or one of two different shapes of coffee cup.
Susie Cooper (1902-1995) was an amazing, creative designer.

The National Museum Cardiff describes their set as:
"Susie Cooper was perhaps the most influential and versatile British ceramic designer of the 20th century. In 1929 she left A. E. Gray & Co. of Hanley, Staffordshire, to establish her own company, Susie Cooper Pottery. Wood and Sons of nearby Burslem supplied her with blank wares for her new company to decorate. From 1932 Cooper began to design her own shapes for Wood's to manufacture on her behalf. The first of these was the Kestrel shape, a practical and versatile shape that was introduced in 1932 and remained in production until the late 1950s. This tea set is decorated with pattern E496. It is typical of Susie Cooper's restrained, modernist approach to design, and illustrates perfectly her supreme skill in matching shape and decoration."

The plates are hand enamelled earthenware.
Strangely they work well on their own as Art Deco shapes!
I just love that Tango orange!

I hope it will not take too long to get the missing cup to make up the 'trio'!

The plate has an impressed mark of "V73" or "W73".
I'm not familiar with this numeration.
Can anyone help?