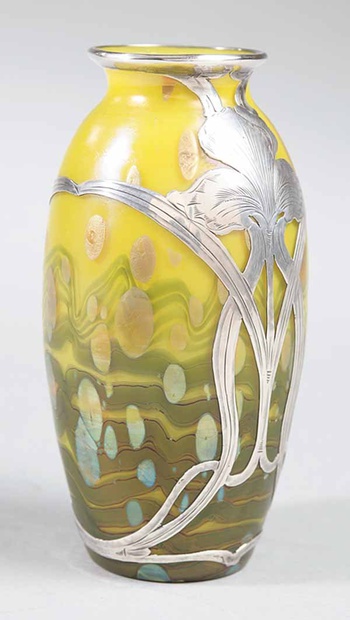 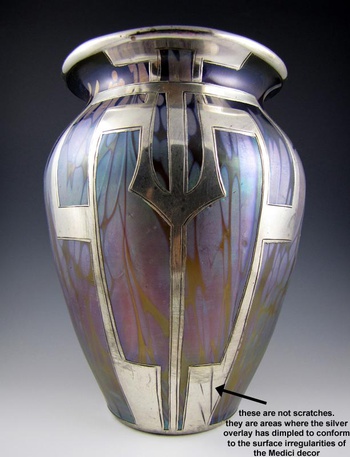 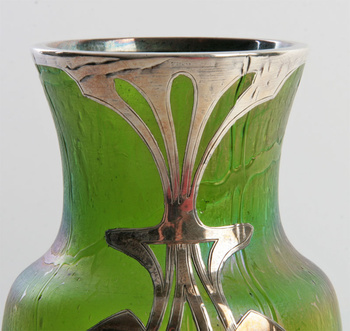 So, let's discuss silver overlay on Bohemian art glass, because apparently there is some preconceived notion that the origin of the overlay has impact on the value and aesthetics of the piece.

First, without looking ahead, does one presume that all of the pieces listed above are Bohemian overlay?

This post will cover two important components of silver overlay, and by overlay I mean the raised overlay that is distinguished from silver deposit, which is flush with the surface of the glass. First, it will establish that there were both important American and European overlay firms and second it will prove that the typical raised overlay was not manually applied to the surface of the glass but instead was galvanically applied through a reduction process.

For those guessing (or who skipped ahead) the first two pieces above are galvanically applied American silver overlay; the first being signed Gorham overlay, while the second is by the Alvin Manufacturing Co. (which incidentally was later bought later by Gorham). The last two pictures are certainly stylistically different and are almost certainly by the German/Bohemian firm of Adolf Zasche. The third picture is galvanically applied silver by Zasche on Loetz, while the fourth picture is the same type of silver Zasche overlay on Kralik. So, I think with this grouping we can firmly establish that Loetz was overlaid by American and Bohemian/German overlay manufacturers, neither of whom were exclusive to just Loetz (i.e., Kralik, Poschinger, etc.).

Now, on to the other point of discussion. The vast majority of silver overlay (not deposit) was conducted galvanically and was not manually applied to the underlying glass. How do we know this? First and foremost, there are actual US and European patents for galvanic overlay, which is a chemical process akin to electroplating, in which many cases the actual patent number for this process is stamped into the silver overlay (particularly in the case of Gorham pieces). And, secondarily, we have physical evidence of this galvanic overlay process by empirically examining the surface characteristics of the overlay in cases of underlying art glass decor that is irregular. This is why I have chosen the glass examples in pictures 3 and 4 above. In both cases, it can be clearly seen that the silver overlay follows the contours and surface irregularities of the underlying decor; a feature that would not be expected if the silver overlay was hand applied.

So, to summarize. Large amounts of Bohemian art glass, to include Loetz Phanomen decors, were bought by distributers in the USA and Europe and then secondarily applied with silver overlay. There are some stylistic differences between American and European silver overlay, but the process by which the silver was applied to the glass is the same (i.e., galvanic/chemical process). And, most importantly, what matters in terms of value and aesthetics of an overlaid piece is NOT from whom the overlay derived, but how well the overlay works with the underlying glass. If there is proper "harmony" between the overlay and underlying decor, then that piece will certainly be more desirable than an overlay piece that "smothers" the underlying glass.