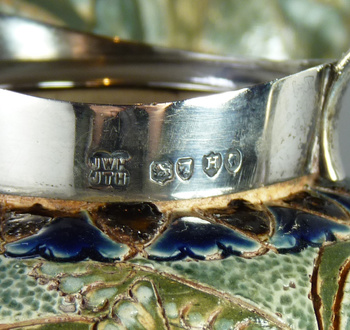 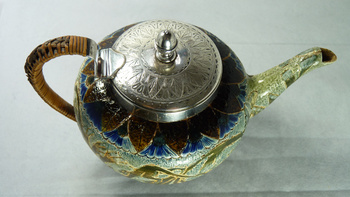 This is an Aesthetic Movement Bachelor's (one cup) Teaset by Doulton Lambeth (became Royal Doulton in 1901), with a design by Mark V. Marshall, and with sterling silver mounts by Hukin & Heath.

The teapot is marked with the Doulton Lambeth impressed mark, dated 1880, impressed M. V. M and a decorators mark I haven't identified yet. The silver mounts are hallmarked for Hukin & Heath in London, 1883.

This is a very unusual little teaset. The sgraffito design of playful monkeys amongst stylised foliage, the lotus-like borders carried up to the silver lid of the teapot, and the geometric silver feet, show the influence of Christopher Dresser, who was designing for Hukin & Heath around this time.

Mark V. Marshall was one of the Doulton "greats", famous for his quirky and exuberant designs, whose work was influenced by the time he spent working for the Martin Brothers before he went to Doulton.

This was a recent "score". I was at an antique fair browsing the stall of a guy selling mid century modern, and spied this among his retro items. The mounts were black, but the hallmarks were still clear, and I recognised the Hukin & Heath stamp. Plus the design of the monkeys was really unusual and as the Aussis might say "Even Blind Freddy would've realised it was something special!"

I asked the price, under $200, and turned around to see two of Auckland's most knowledgeable dealers in deep conversation standing right beside the set. I quickly bought it and walked over and picked it up.

Both dealers suddenly became very interested, and we discussed whether it could be Doulton, Hannah Barlow, etc., as the pottery marks weren't visible, being under the silver mounts. The dealers congratulated me and cursed that they hadn't been looking at what was right under their noses.

It wasn't till I got it home and carefully unscrewed the silver foot of the teapot that I found the pottery marks - a good day at the fair! 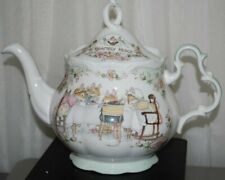 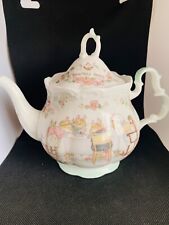 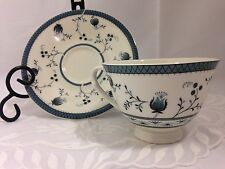