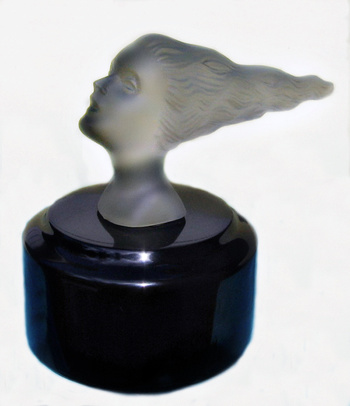 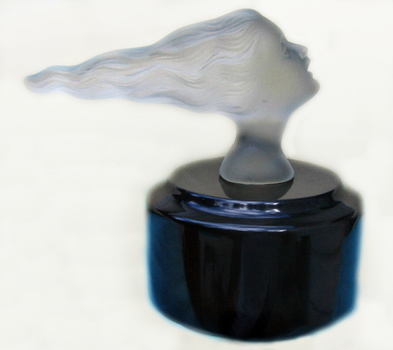 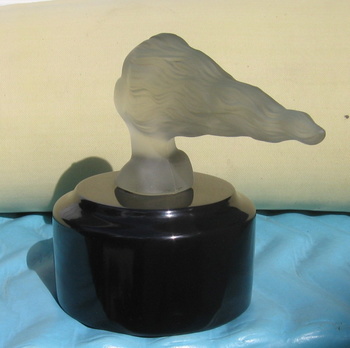 In early September 2012, this Corning Glass Daughter's Head Mascot came up for sale. I had my first one some time before this. Since it had a nice, perfect, marble base I decided to buy it, and I was very pleased when I got it. Almost a nicer example and it came from the states, so I did not have to go to England's auctions for this one. She's a beaut !~

My first Corning glass mascot came with chromium base ! I deleted the background, and this was photographed on a blue satin cloth. There was also a mother's head mascot done, similar but somewhat larger. This glass mascot was also used on a chrome ashtray base. Its use as a mascot may have been secondary, and an adaptor was made to mount to a radiator cap. Lately I have seen some chrome ones, they are reproduction.

This well-known mascot is illustrated in the book Motoring Mascots of The World by William C. Williams, pg. 193 and in Mascottes Automobiles by Michel LeGrand, pg. 91. Both books had no information about the mascot. One or both were completely wrong in attribution as to maker. Most books have no info as to history on the subject, most of the worlds biggest collectors of mascots never started to collect them until about 1980, hence the complete loss of information on most mascots in general. They were not even shown in books on art deco as there was so little information known about them and the lateness of experts in the field.