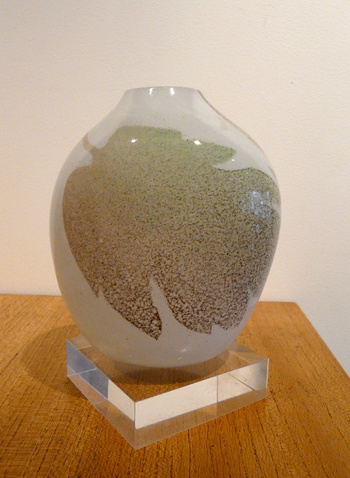 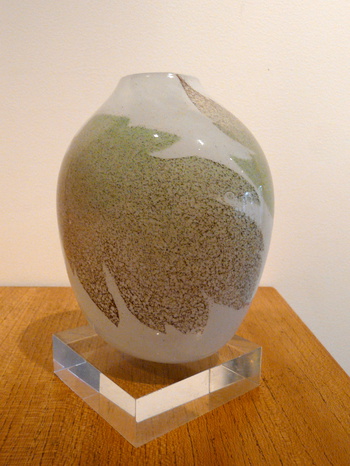 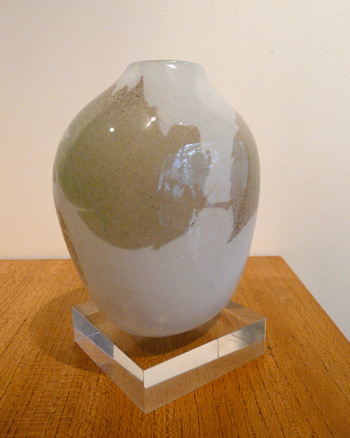 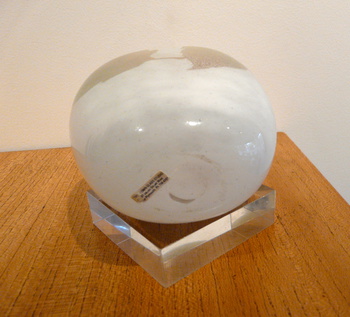 A piece of glass from New Zealand. Hi Inky!

A couple of years ago I found this vase at Rozelle markets here in Sydney one Saturday morning. It was an unusual piece of glass in itself and I liked the autumn leaves that float across the surface of the vase. In fact I’m not sure how it was done. Is this a form of graal?

The bottom of the piece has a nice pontil mark and is signed M. Angus.

There is also a paper label which reads ' The Blown Glass Studio ' 81 Devon Street West, New Plymouth. New Plymouth is the major city of the Taranaki Region on the west coast of the North Island of New Zealand.

Mandy Angus was born in New Zealand in 1956. Originally she trained as a nurse but left to travel and experience other areas of work. She studied sculpture, life drawing and then worked for three years (1980 - 83) to obtain a Diploma of Design and Glass Arts.

For the next two years she worked in her own blown glass studio and in 1989 moved to Taranaki where she was employed in a production glassware studio.

In 1992 she received an Arts Council grant to set up her own studio in New Plymouth, which she built and opened two months later. I think she was joined there by Joan O'Leary, another name in New Zealand glass. Five years later she became a part-time tutor at Whanganui Polytechnic where she continued her work in hot glass.

“Hot glass lends itself to flowing, asymmetric shapes. This is the direction my work has currently been taking. The transparency and fluidity of glass lends itself to ideas taken from the land and sea. I very rarely work with round shapes as I find the fluid shapes of nature more demanding to make, and more pleasing to my eye.”